Dead by Daylight’s Sadako Rising Chapter has surfaced, bringing Sadako – known in Dead by Daylight as The Onryō — and Yoichi Asakawa into The Fog. Inspired by Kōji Suzuki’s novel Ringu and its original acclaimed film adaptation, Sadako’s arrival presented many exciting challenges for the design team.

The daughter of a famed seer from Izu-Oshima, Japan, Sadako’s psychic abilities surged when a journalist made the fatal mistake of calling her mother a fraud. Lured to an old well and sent to rot in a watery grave, Sadako’s powers manifested into a cursed videotape that doomed its viewers to death in seven days. She emerges on the final day, crawling from the television, glaring with murderous rage. 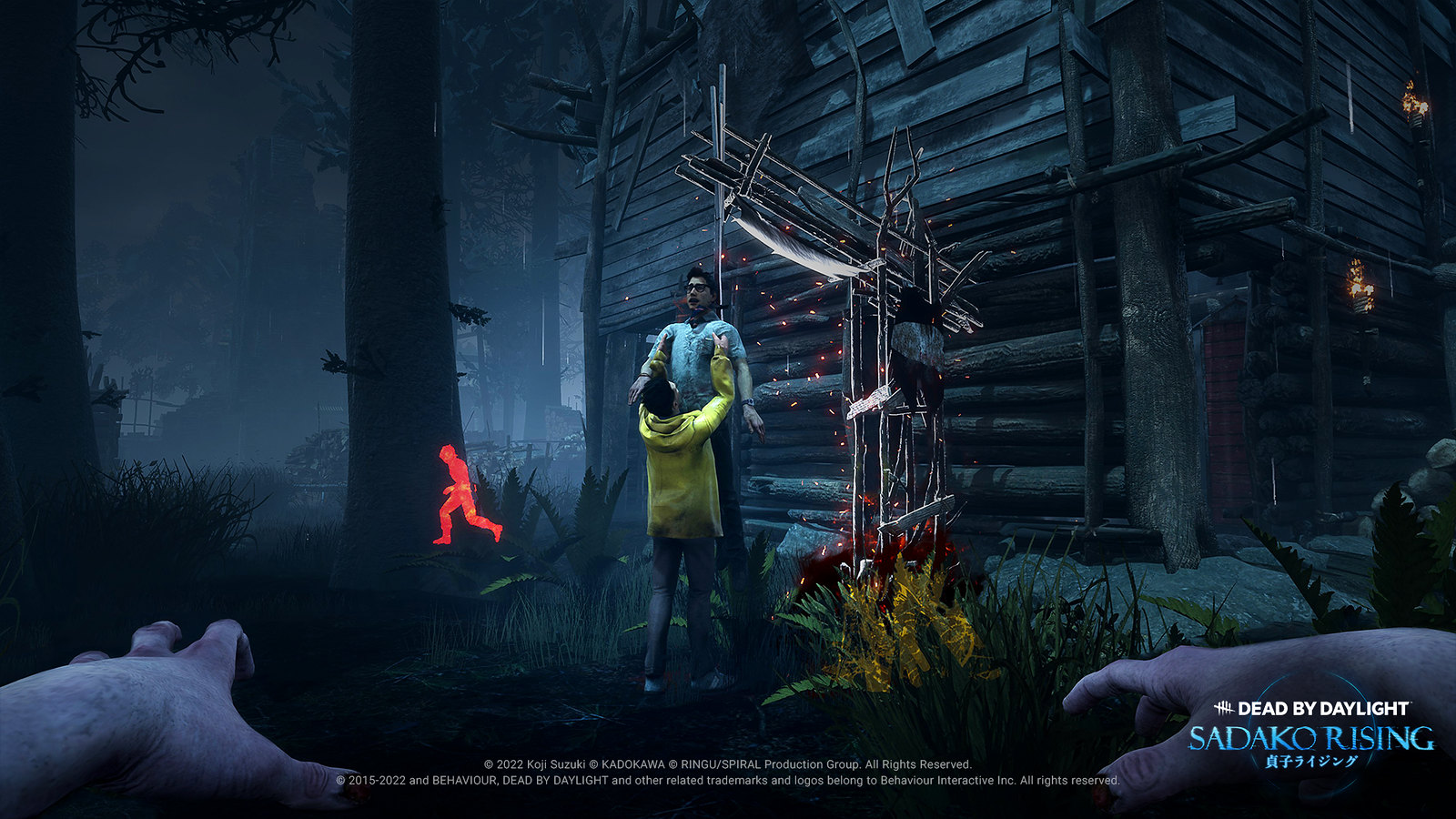 Given that she possesses psychic abilities, Sadako isn’t exactly hands-on in her approach. In Dead by Daylight, however, a Killer’s objective is to down Survivors, pick them up, and carry them to a hook. It was imperative to explore how Sadako could engage in these dark activities while maintaining true to her character.

“We wanted to avoid all physical contact with Sadako directly,” reveals Game Design Director Matthew Spriggens. “She would look very strange carrying larger Survivors on her shoulder – especially someone like Jeff Johansen. Instead, we relied on the telekinetic nature of Sadako’s power for everything from breaking pallets, damaging generators, and even picking up Survivors and placing them on hooks.”

“Right from the start, we were looking to capture the haunting and creepy quality of Sadako from the classic Ringu film,” reflects Spriggens. “How she moves, slowly and deliberately, to menacingly creep up on her victims. We always saw Sadako as more of a stealth Killer – you would know when she is near, but you wouldn’t see her until it was too late. And of course, we had to include the TVs and videotape directly in the game mechanics.”

As horror fans know, Sadako’s emergence from the television has become immortalized as an iconic moment and would therefore need to be acknowledged in-game. “It was clear from early testing that projecting to TVs on the other side of the map was a very compelling aspect of her power,” says Spriggens. “On top of that, she produced plenty of unexpected jump-scare moments, popping out of TVs behind Survivors when they least expected it.” 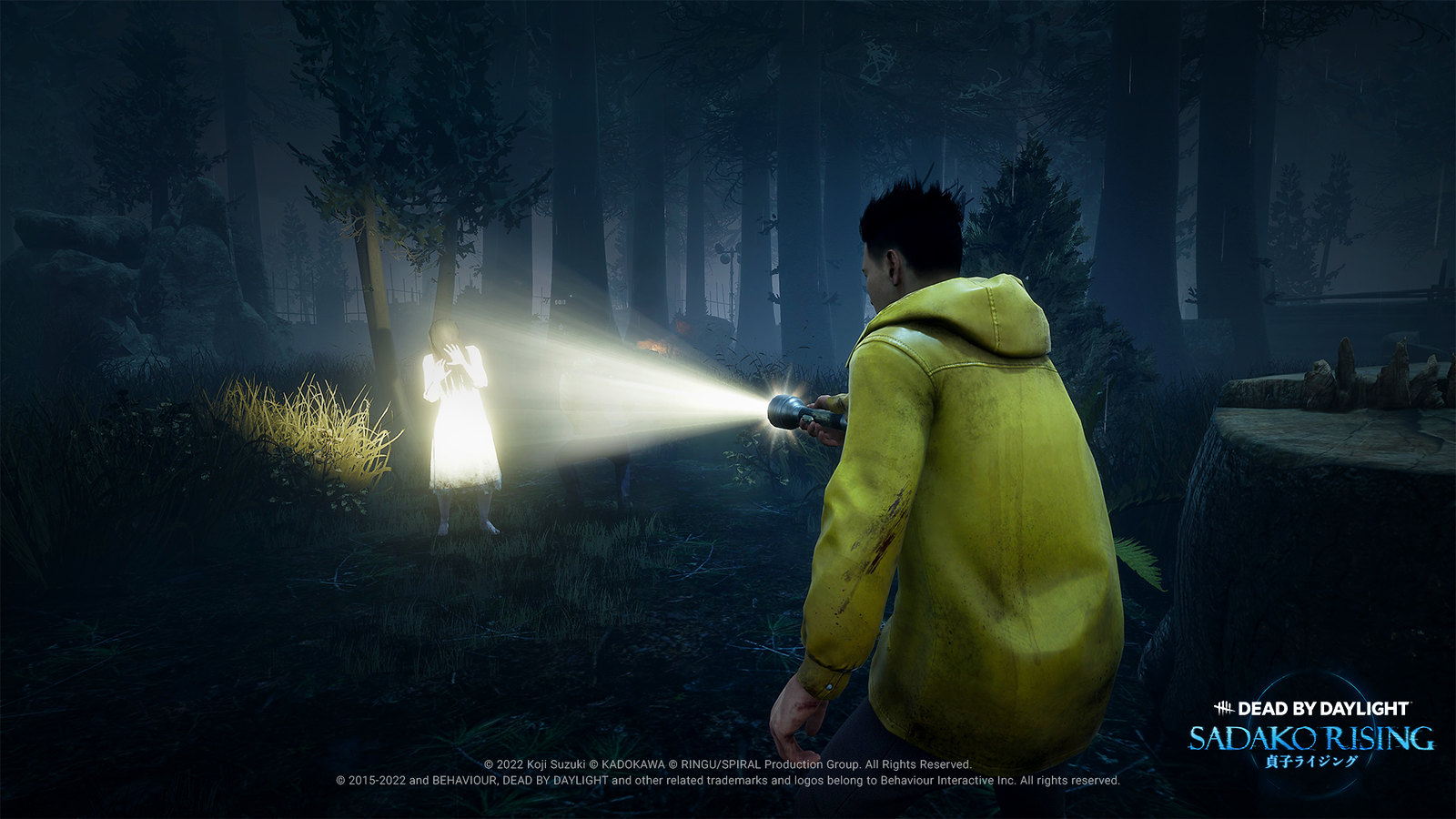 While her psychic abilities are integral to her character, affecting everything from her movement to her mannerisms, it was equally integral to recreate the elaborate cursed videotape. To conjure the pervading sense of dread associated with one’s impending demise, the designers set out to recreate a macabre seven-day countdown. Only thing is, that’s a tad longer than the average Dead by Daylight trial.

“We knew that we wanted to feature the dreadful feeling of a curse that kills in seven days,” explains creative director Dave Richard. “The challenge was to contract this experience into a match’s much smaller time frame.”

“We opted to introduce the Condemned Meter, where various actions add up to seven notches on a Survivor’s meter,” explains Richard. “Once that meter is full, Sadako can instantly kill that Survivor when they enter the dying state. This simple system recreates the doom experienced by Sadako’s victims in other media. It pressures the Survivors to complete their objectives promptly or to take some precious time to copy the cursed tape, spread Sadako’s message, and as such, save themselves from a terrible death.” 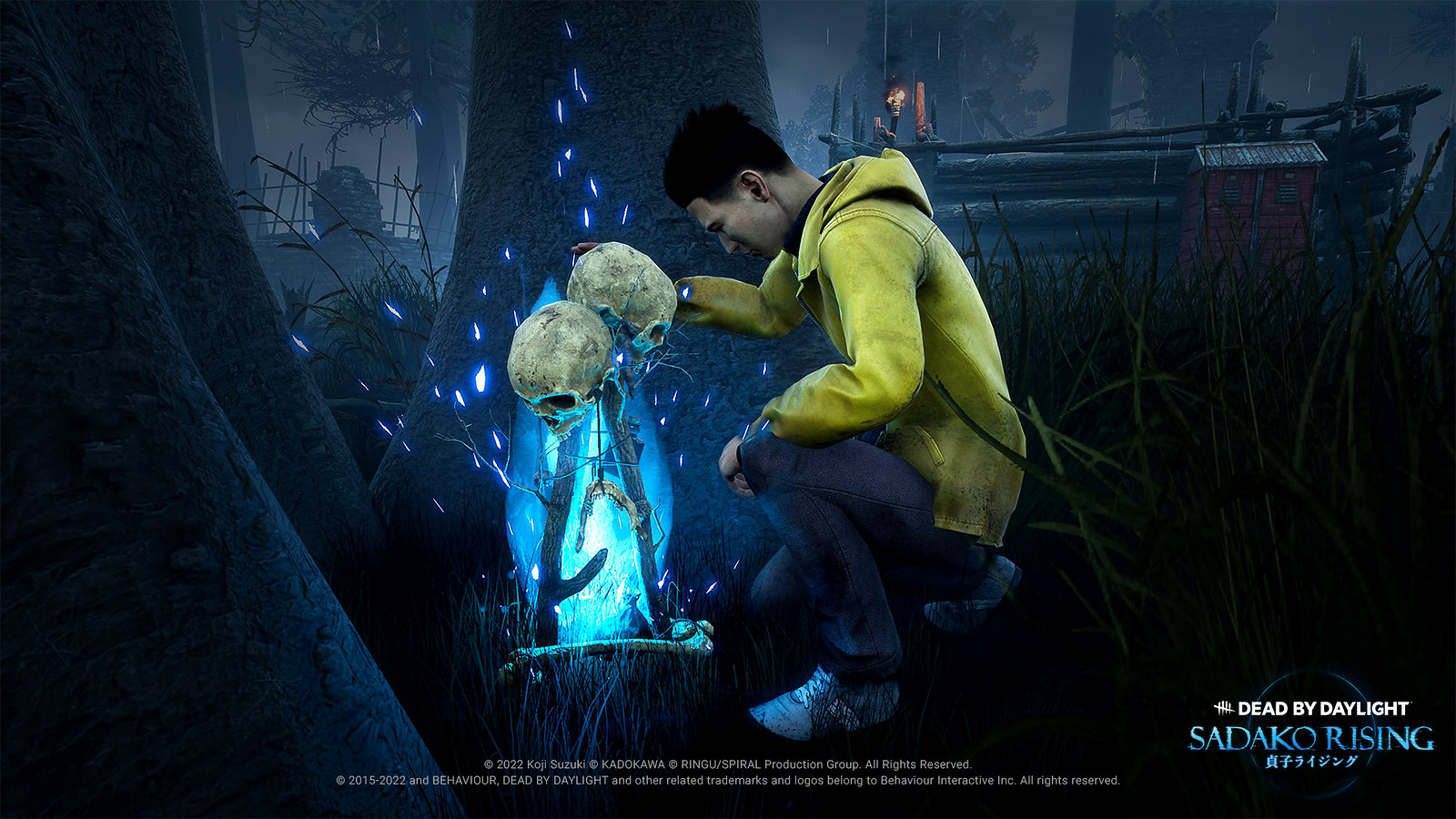 Not only is the experience a faithful recreation of Sadako’s modus operandi, but it also provides players with a unique sense of urgency – not to mention the agency to make life-altering choices.

“The first iteration of the power included TVs, but spawned a videotape rather than giving it to the Survivor as a result of the interaction,” explains one of Dead by Daylight’s Game Designers. “Any Survivor could shut down the TVs, but then they would be cursed — known as “Condemned” — and had to pick up their videotape, usually on the other side of the map. This version worked and we loved the idea of a videotape with the curse, but it didn’t quite hit the mark in terms of gameplay. Having to fetch the tape broke the flow of the match too abruptly and too often — plus it didn’t include the iconic number seven.”

“Eventually, we decided to make the curse an incremental progression instead of a binary on/off effect, and we added more ways for both sides to interact with the curse,” continues the Designer. “The Killer applies the curse to nearby Survivors when projecting to a television. Survivors can prevent the Killer from projecting to specific televisions by turning them off. Doing so gives them a videotape that increases their Condemned progress over time. Survivors who reach full Condemned, the equivalent of seven segments, can be Killed by Sadako once put in the dying state.” 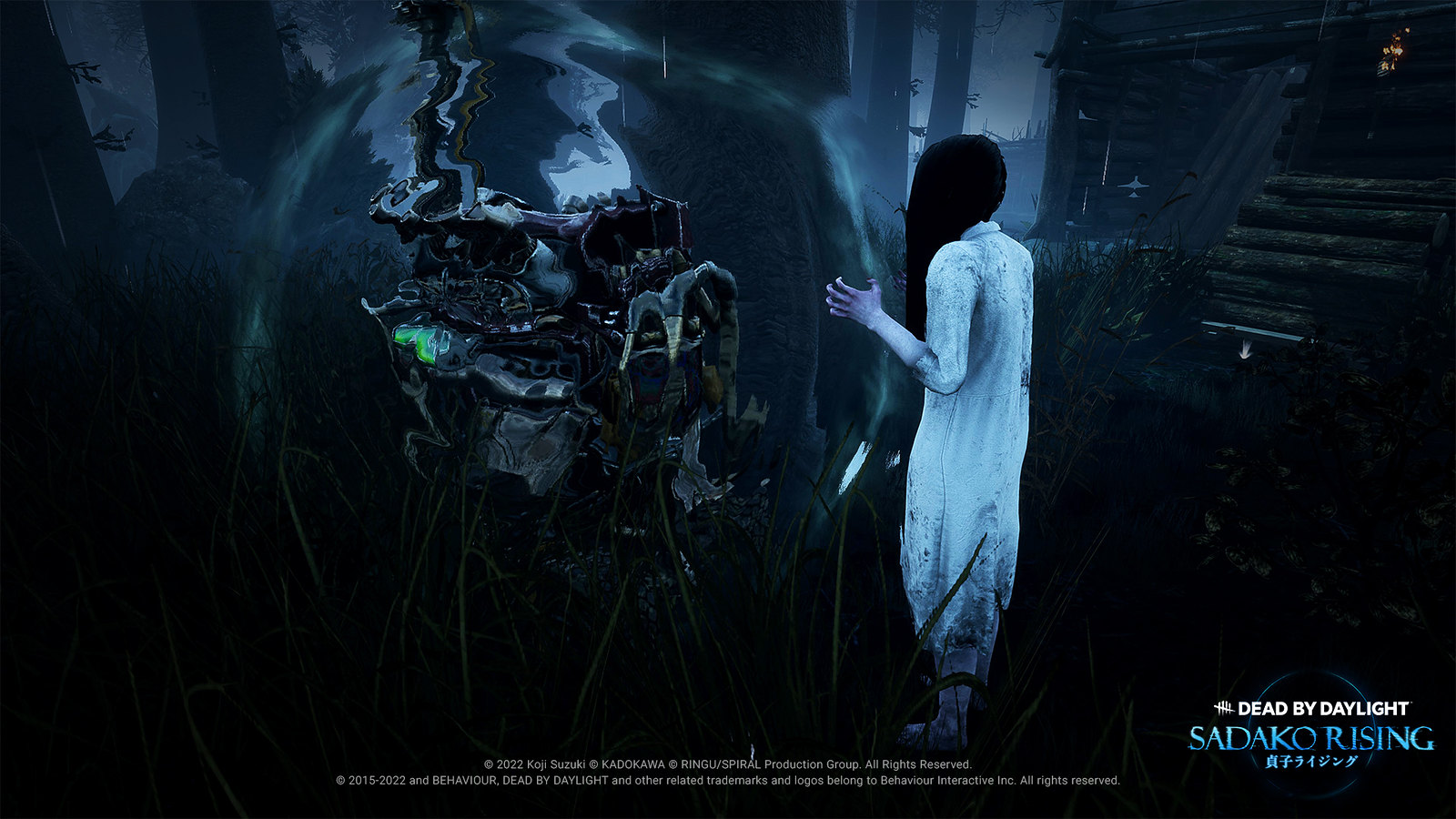 The Sadako Rising Chapter introduces three new Killer Perks — Scourge Hook: Floods of Rage, Call of Brine, and Merciless Storm. In addition to bringing new dynamics to the gameplay balance, these Perks must also honor the spirit of the character.

“Sadako’s biggest strengths are her psychic powers and her ability to turn her trauma into an unwavering thirst for revenge,” says Spriggens. “We always start with the core themes of character and brainstorm how those can be adapted to in-game situations. In this case, we worked with psychic telekinesis, precognition, and revenge as the starting point.”

“From there, we looked for interesting gameplay spaces that we could adapt to Killer perks. The goal is to match the themes to the mechanics in a meaningful way, making them exciting and engaging for our players. It’s always an interesting process when working with an amazing license like Ringu.”

Experience Sadako’s fury for yourself with Dead by Daylight’s Sadako Rising Chapter, available March 8 for PS4 and PS5. 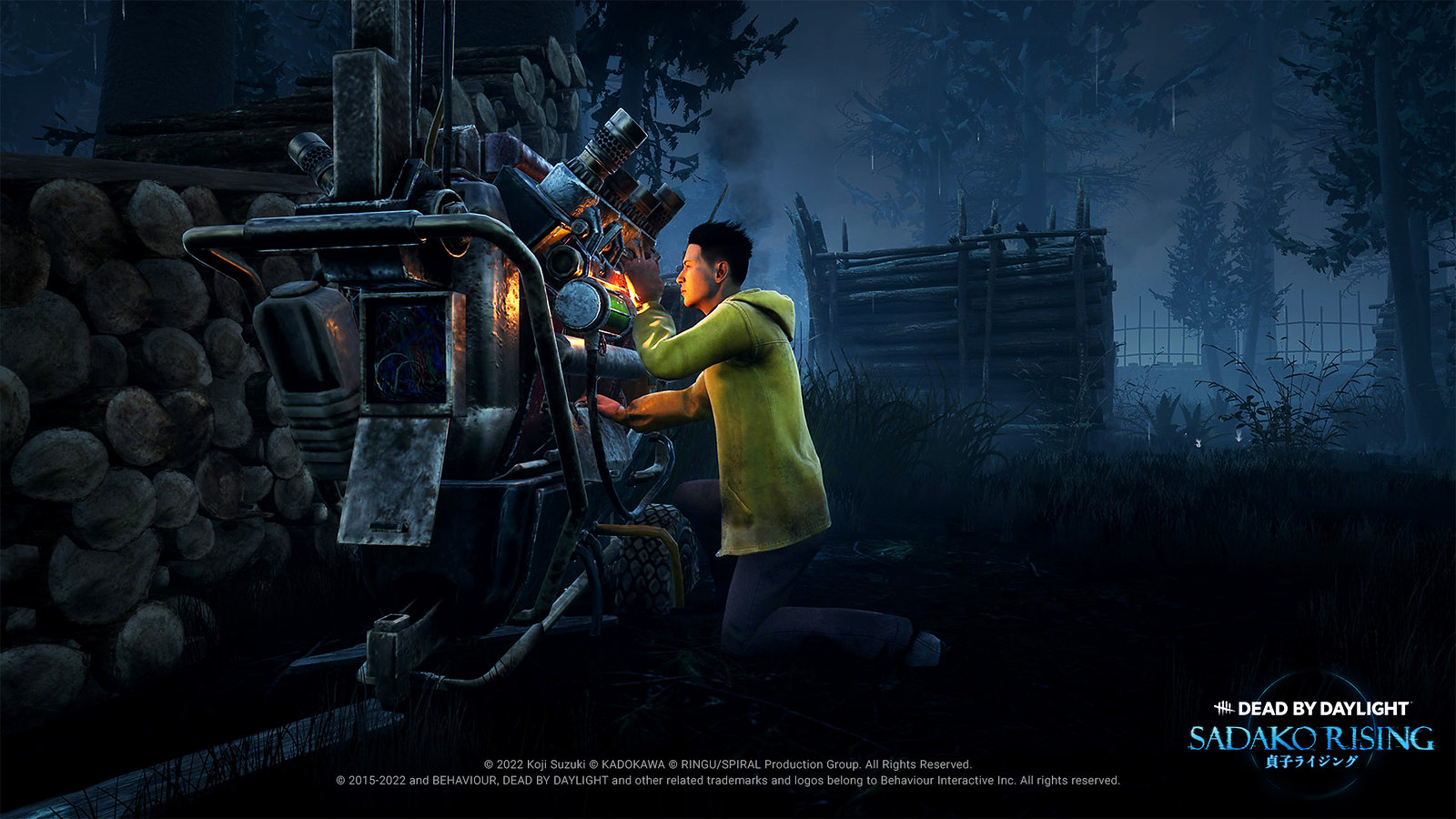