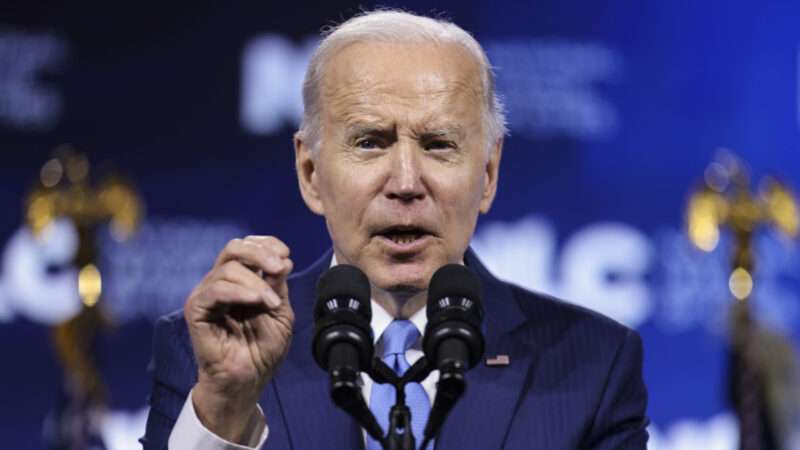 One of the most important lessons in tax policy is that the person who is handed the bill and sends the check to the taxman isn’t necessarily the person shouldering the entire cost—or even the bulk of the cost. A tax might first directly hit a few rich taxpayers, but it never remains confined there. Case in point: the logic and marketing of the novel “billionaire tax” introduced in the White House’s fiscal year 2023 budget proposal.

As described, it would impose a wealth tax on certain appreciated assets of households worth more than $100 million. This would break new ground in unfair taxation by requiring these households to pay at least 20 percent—composed of both traditional taxes on income and, going forward, unrealized gains in owned liquid assets.

Garrett Watson and Erica York of the Tax Foundation explain how this would work:

OK, that’s stiff, but let’s focus on everyone else. President Joe Biden’s administration reassures us that we—non-billionaires or millionaires—wouldn’t pay a dime of this tax as it would only be imposed on the top 0.01 percent of households, with half of the revenue coming from checks written by billionaires. I wish.

There are many problems with this tax. For instance, it is unclear that taxing wealth as opposed to income wouldn’t face constitutional problems, as Sen. Joe Manchin (D–W.Va.) pointed out to the president. In addition, as we have learned from other wealth taxes, it will be administratively prohibitive. This is why most of the European countries that previously had wealth taxes eventually abandoned them.

In addition, it would likely raise very little revenue. This is precisely because capital is mobile and would soon fly to other less-restrictive countries to escape the tax. Alternatively, the owners of the assets in question could be forced to sell—often to foreigners—also leaving less to tax.

More importantly for the purpose of this article, it would reduce U.S. saving and capital formation, which would have consequences for everyone else who isn’t a billionaire. The wealth of billionaires isn’t held the way most believe it to be—stored as if in gold or cash under their beds. A lot is invested back into their own companies, meaning wealth taxes ultimately hurt their employees.

In the same way, billionaires’ wealth is some of the capital that ends up being lent to smaller companies, new entrepreneurs, and other job creators. This is yet another way the wealth tax would hurt non-billionaires.

Finally, as my Mercatus Center colleague Thomas Hoenig recently noted in a Barron’s magazine piece about why a billionaire tax should worry the middle class, if such a proposal were implemented, it would very likely be expanded to apply to more and more Americans. He cites the example of the income tax, which Congress passed in 1913 and “topped out at 7% for income above $500,000.” $500,000 in 1913 would be over $14 million today. Now, the top tax rate is at 37 percent for income above $539,900.

The same is true of the 1969 alternative minimum tax (AMT). Then, the tax literally applied to only a few super-wealthy taxpayers who were accused of dodging taxes. However, over time, Hoenig explains:

With price and wage inflation, the number of households subject to the AMT increased from 200,000 in 1982 to 5.2 million in 2017, although their real income remained relatively unchanged. The tax was adjusted down in 2018, but only temporarily, and the middle class will again carry a heavier tax burden after 2025.

The bottom line is to be careful what you wish for, because this supposed billionaire tax may inadvertently tax you, too.