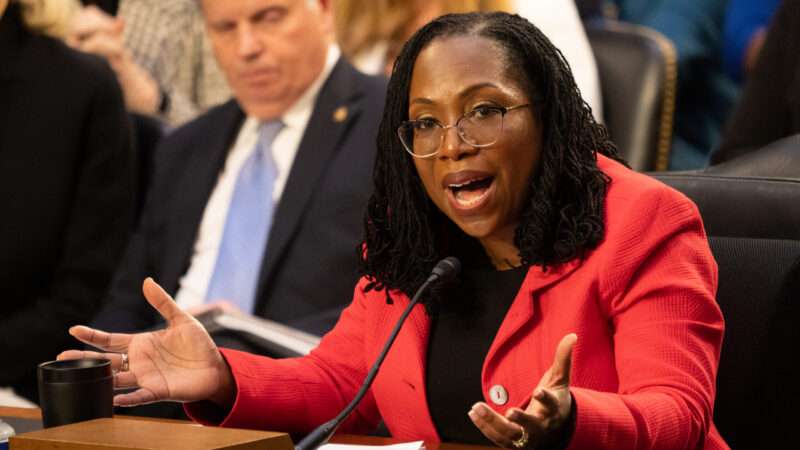 GOP senators who are attacking President Joe Biden’s Supreme Court pick seem weirdly unaware of how our justice system works. By focusing in part on Ketanji Brown Jackson’s former role as a criminal defense attorney, they act as if it’s wrong to provide a defense to people accused of a crime—and that if the government levels a charge, it must be right.

Hey, if you haven’t done anything wrong, you have nothing to fear—or something like that. “Like any attorney who has been in any kind of practice, they are going to have to answer for the clients they represented and the arguments they made,” Sen. Josh Hawley (R–Mo.) said in reference to Jackson and other Biden nominees. Apparently, defense attorneys should only defend choirboys.

Yet I guarantee if Hawley—known for his fist pump in support of Jan. 6 protestors at the U.S. Capitol—became the target of an overzealous prosecutor who accused him of inciting an insurrection, he’d be happy to have a competent defense attorney to advocate on his behalf. That attorney shouldn’t be forever stained for defending someone as loathsome as Hawley.

These hearings remind me of how difficult it is to have a calm debate about criminal-justice policy—and how tilted our system is on the side of the government. As the Christian Science Monitor pointed out, if confirmed Jackson will be the nation’s first Supreme Court justice to have served as a public defender, with Thurgood Marshall being the last justice to have criminal defense experience.

Marshall was born when Theodore Roosevelt was president and retired 31 years ago. A study last year by the libertarian Cato Institute found the Trump administration’s judicial appointments tilted in favor of prosecutors over those who represented individuals by a 10-to-one margin. Only 14 percent of the liberal Obama administration’s appointees defended individuals. Most judges strive to be fair, but their backgrounds color their worldview.

That brings us to district attorneys. Most people believe their role is to secure convictions, but that’s not entirely the case. “The primary duty of the prosecutor is to seek justice within the bounds of the law, not merely to convict,” the American Bar Association explains. They are required to “protect the innocent and convict the guilty, consider the interests of victims and witnesses, and respect the constitutional and legal rights of all persons.”

In reality, DAs are ambitious political animals. As the Jackson hearings exemplify, it’s much easier to get confirmed as a judge or elected prosecutor by playing the tough-on-crime card for the obvious reason that the public is fearful of crime—especially now, as long-falling crime rates are headed in the wrong direction. It’s tougher for a DA to succeed by pledging a commitment to justice and balance.

For decades, prosecutors have been closely aligned with police unions, which partially explains why it’s been so hard to hold accountable officers who engage even in egregious misbehavior or who are overly aggressive. Traditionally, it’s been difficult for a district attorney to win an election without the backing of those unions, which represent rank-and-file officers.

That spurred a well-funded movement to begin electing “progressive prosecutors”—mainly in big, liberal cities with large populations of poorer people who have been on the receiving end of our justice system. Unfortunately, these DAs have gone too far in the other direction.

For instance, Los Angeles County District Attorney George Gascón initially banned “prosecutors from seeking the death penalty or life sentences without the possibility of parole, while also severely limiting the way prosecutors could use sentencing enhancements,” the Los Angeles Times reported. He also refused to sentence juveniles as adults.

He’s changed course amid a backlash. But by imposing hard-and-fast policies rather than seeking out the just response in each case, Gascón’s approach is the mirror image of a Neanderthal prosecutor who was hard wired to always be tough. Likewise, San Francisco DA Chesa Boudin is accused of refusing to prosecute many serious crimes that are turning his city into a scene from Road Warrior.

Traditional prosecutors have overcharged people, winked at police abuse and filled the prisons with people who ought not to be there. But these liberal prosecutors have pursued an ideological agenda that has failed to consider legitimate public fears of dangerous criminals. They forget economist Adam Smith’s quotation, “Mercy to the guilty is cruelty to the innocent.”

Our nation is finally—albeit clumsily—debating justice policy. Even in law-and-order Orange County, the DA’s race is pitting two candidates, incumbent Todd Spitzer and challenger Pete Hardin, who at least claim to seek some middle ground. Their race isn’t more edifying than the Jackson hearings, as they prefer to trade race- and sex-related allegations rather than focus on the fundamentals of the job.

Maybe someday soon, DAs and justices can apply to the justice system the Goldilocks Principle—not too hot, not too cold, but just right.

This column was first published in The Orange County Register.

The post Conservatives Say They Care About the Constitution. Until They Talk About Criminal Justice. appeared first on Reason.com.