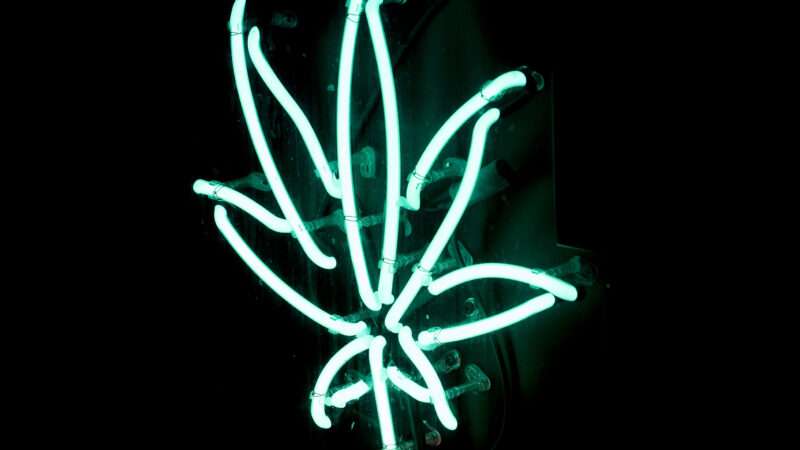 The process for acquiring marijuana at the pot shop a few storefronts away from Reason‘s D.C. office is pretty straightforward. You walk in, order off a menu, provide a cash donation to one attendant, receive your weed from another and go. Things can get a little more elaborate at other brick-and-motor dispensaries in the city, where one purchases a perfunctory lighter or t-shirt for $45 and receives a “gift” of marijuana in exchange.

These gifting operations are an odd quirk of D.C.’s status as a federal district that also legalized weed.

In 2014, 70 percent of city voters supported a ballot initiative that legalized adult possession and cultivation of cannabis. Ever since, the U.S. Congress—which has ultimate authority over the district’s laws—has included riders in its budget bills preventing the D.C. government from spending any money taxing or regulating cannabis sales.

The result is, oddly enough, the freest market for weed in the country because it lacks the heavy cannabis-specific regulations and taxes levied in every other state which has legalized recreational marijuana.

This ongoing experiment in deregulated drugs survived destruction by the slimmest possible margin on Tuesday night, when the D.C. City Council came one vote shy of passing an emergency measure, proposed by Council Chairman Phil Mendelson, that would have given the mayor and city liquor officials the power to close gifting shops for four days at a time and hit them with civil fines of up to $30,000.

Landlords that rent to a gifting store could also be fined $30,000 for their first violation and $60,000 for a second violation.

On the flip side, Mendelson’s bill would have loosened regulations for those purchasing from the city’s seven licensed and regulated medical marijuana dispensaries. People would no longer need a doctor’s note to purchase at these shops. The maximum allowable purchase at these dispensaries would increase from 4 to 8 ounces.

Mendelson and other supportive councilmembers argued the measure was necessary to protect a licensed medical marijuana industry from its freewheeling, gray market competition.

“As the legal medical marijuana market continues to feel the effects posed by illicit cannabis storefronts and delivery services, it is necessary to take additional steps to provide relief to legal businesses and patients,” reads a tweet from Mendelson.

The proposed emergency resolution notes that some of D.C.’s gifting stores are located near schools, most are owned by non-D.C. residents, and none have to pay the fees or submit their products to the same testing that medical marijuana operations do.

Long-time district cannabis activists have argued that this is just rank protectionism that goes against the will of D.C.’s voters.

“They’re trying to create a drug war 2.0 in the name of industry,” says Adam Eidinger, one of the lead campaigners for the 2014 legalization initiative, I-71. “The one excuse for this bill is to benefit these limited, lucky license holders. We should live in a country of unfettered competition.”

Targeted gift shops themselves campaigned vigorously against the Mendelson bill as well. The Washington Post reports that they spread the word among customers and offered free joints to people who called councilmembers and urged them to oppose the initiative.

Mandelson’s bill “would peel back the very little protections that I-71 offers to compliant, small businesses and would result in financial struggle for the many employees of these businesses, a huge percentage of whom are Black or people of color,” said the I-71 Committee, a new cannabis trade association for D.C.’s gifting stores.

Because Mendelson’s bill was an emergency measure, it needed nine of 13 city councilmembers to support it, reports the Post. It ultimately failed on an eight-to-five vote.

Eidinger credits the grassroots efforts of businesses and customers for stopping the bill for the moment. He says district residents are happy with the current state of the industry.

“No one is clamoring for this,” he says. “People are enjoying being able to walk out of their front door, buy a book, and get a bag of weed with the book.”