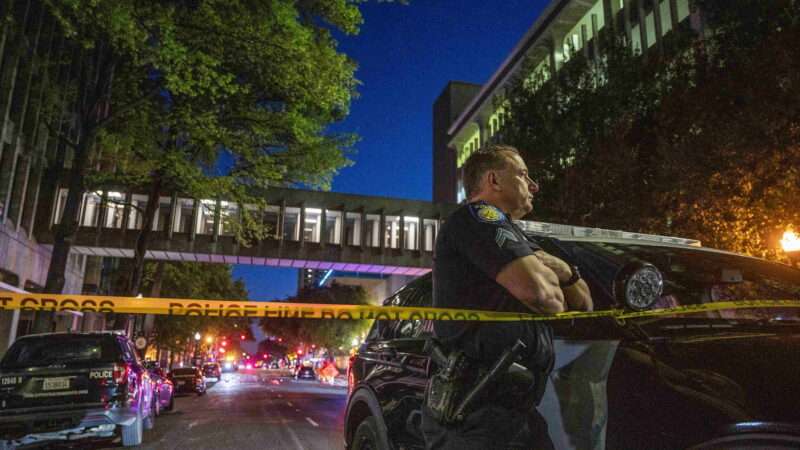 A mass shooting that killed six people and injured 12 in Sacramento last weekend predictably provoked immediate agitation for stricter gun control, including policies that seem utterly irrelevant to the facts of the case. That’s a familiar pattern in the gun policy debate, which consists largely of reiterating previous proposals in response to mass shootings, regardless of whether those ideas have anything to do with the most recent example.

The Sacramento Bee described the weekend’s apparently gang-related violence, which began around 2 a.m. Sunday in a downtown area where nightclubs had just closed, as “the worst mass shooting in city history.” The Los Angeles Times says “the shooting was California’s single deadliest in 2022,” although “there have been worse in the last year.” While these incidents supposedly underline the need for gun control, they simultaneously cast doubt on that argument, since California already has the strictest gun laws in the country.

Everytown for Gun Safety implicitly acknowledges that inconvenient fact in its press release about the Sacramento shoot-out. “Gun sense champions in California have continually responded to gun violence tragedies by taking action on life saving gun safety policies,” it says. “Strong gun laws save lives—and California is a clear example of that. The state continues to have one of the lowest rates of gun violence in the country while their lawmakers are leading the gun violence prevention movement.”

California does have a relatively low rate of gun-related deaths: the seventh-lowest in the country, according to data from the Centers for Disease Control and Prevention. Its ranking is less impressive, however, when you focus on firearm homicides, which is what Everytown for Gun Safety ostensibly is talking about in this context. Based on data from 2010 through 2017, California’s gun homicide rate was middling: lower than the rates in 24 states but higher than the rates in 25 states, including many with looser gun laws.

If you want to make the case that California’s firearm restrictions have resulted in fewer homicides than otherwise would have occurred, you need to look at what happened after those laws were passed and compare it to what happened in otherwise similar places that did not enact such laws. The observation that “California continues to have one of the lowest rates of gun violence in the country” (if you include suicides) as legislators pass one gun law after another hardly shows those laws are working as advertised.

Even as Everytown for Gun Safety argues that California’s strict gun laws have been effective, it says they have been stymied by the failure of other states to follow California’s example. “Gun violence continues in the state because it is surrounded by states with weaker gun laws and has become the epicenter of ‘ghost guns,'” it says. “California is only as safe as the nearest state with weak gun laws, so we need federal action to ensure that every state in the country requires background checks on all gun sales.”

The reference to “ghost guns”—i.e., homemade firearms without serial numbers—seems like a red herring based on what we know at this point. The investigation of the Sacramento shooting, which so far has resulted in three arrests, is ongoing. The Los Angeles Times says Sacramento police believe it started with a dispute between gang members. So far, however, I have not seen any reference to “ghost guns.” In any case, California already requires serial numbers on all guns, including homemade ones as of 2016. According to Everytown for Gun Safety, the state nevertheless “has become the epicenter of ‘ghost guns.'”

Police said more than 100 rounds were fired by multiple people during the Sacramento shooting. One of the weapons, they said, was a handgun that had been illegally modified so that it qualifies as a “machine gun” under California law, meaning a weapon that “shoots, is designed to shoot, or can readily be restored to shoot, automatically more than one shot, without manual reloading, by a single function of the trigger.” California prohibits possession of such firearms without a special, rarely issued permit, and they are strictly regulated under federal law, which has banned sales of newly produced machine guns to civilians since 1986.

What about requiring “background checks on all gun sales”? California has required “universal background checks,” covering private transfers as well as sales by federally licensed dealers, since 1991. A 2019 study found that requirement “was not associated with a net change in the firearm homicide rate over the ensuing 10 years in California.” Another study suggested that such requirements are widely disregarded, finding that background checks increased when Delaware enacted a law like California’s but not when Colorado and Washington did.

The problem, according to Everytown for Gun Safety, is that many states do not require universal background checks, which is why we need a federal law imposing that requirement on the entire country. But there is little reason to think that people will be more inclined to follow this requirement, which in practice means that all gun transfers have to be mediated by a federally licensed dealer, simply because Congress joins California et al. in saying they should. More to the point, it is hard to see how such a requirement is relevant to what happened in Sacramento.

The converted handgun that police recovered after the shooting was stolen, which is not the sort of transfer that would be affected even by perfect compliance with a law requiring “background checks on all gun sales.” According to a 2019 study by the Bureau of Justice Statistics, just 10 percent of guns used in crimes were obtained from a “retail source” such as a gun store, a pawn shop, a flea market, or a gun show. Nine out of 10 were obtained from informal sources, including friends or relatives, the “underground market,” and theft.

It makes sense that criminals would prefer such sources, especially if they have felony records that disqualify them from legally possessing firearms. But given these longstanding workarounds, expanding background-check requirements so that they notionally cover all transfers cannot reasonably be expected to have a significant impact on criminals’ access to guns.

To suppose that a federal law requiring “background checks on all gun sales” could have prevented the Sacramento shooting, you would have to believe that the perpetrators 1) would have failed background checks and 2) evaded them by obtaining guns from private sellers in other states who would have complied with such a law. That is clearly not true of the converted handgun, and it seems unlikely that it will prove to be true of the other firearms used in the shooting.

Everytown for Gun Safety also suggests that California legislators should respond to this incident by approving 10 bills, including “legislation to require schools to notify parents and guardians about secure storage laws,” “legislation to allow lawsuits against manufacturers and sellers of firearms for the harm caused by their product,” “legislation to further restrict ghost guns in California by ensuring that these parts and kits cannot be sold until they are treated as firearms under federal law,” and “legislation to create a private right of action for the residents of California that would allow citizens to sue anyone who is found to be in violation of the state’s firearm laws relating to the illegal manufacturing/transferring/selling of either assault weapons or ghost gun parts.”

What all this has to do with the incident that supposedly demonstrates the need for such measures is anybody’s guess. “After the Sacramento shooting,” an NPR headline informs us, “the state with the most gun laws may soon get more.” The Sacramento Bee notes that “California has [the] toughest U.S. gun laws” and wonders: “After [the] Sacramento shooting, what else can lawmakers do?” The Bee describes some of what they have done so far:

They’ve banned high-capacity magazines and cracked down on assault weapons. They’ve made it so Californians have to pass a background check to purchase a gun and ammunition. They’ve prohibited buyers from having ammo or “ghost” gun parts shipped directly to their homes. When it comes to gun laws, California’s legislators have passed some of the most stringent regulations in the country, checking off nearly every box on national gun control advocates’ wishlist.

The Bee omits some of the other boxes California has checked, including gun registration, a 10-day waiting period for gun purchases, a broad “red flag” law that shows little regard for due process, and a carry permit policy that treats “the right of the people to keep and bear arms” as a privilege to be granted at the government’s discretion. But there are always more boxes on “gun control advocates’ wishlist.” Everytown for Gun Safety was ready with a dozen ideas. Whether they are good ideas—and in particular, whether they plausibly could prevent the sort of violence that Sacramento saw over the weekend—is another matter.