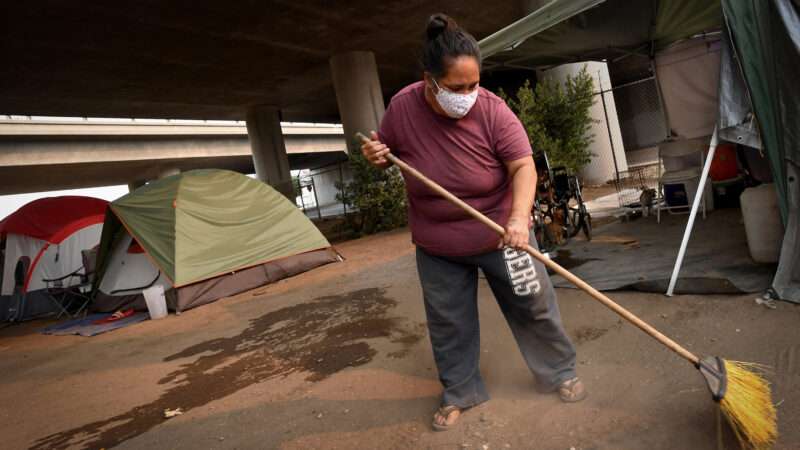 The city of Fresno, California, has been trying to prevent citizens from documenting sweeps of homeless encampments in town. The American Civil Liberties Union of Northern California (ACLU NorCal) is suing to try to stop this violation of First Amendment rights.

The ACLU NorCal complaint takes aim at an amendment to a city ordinance approved on February 28 that allows city officials to construct barriers surrounding homeless encampments when the city comes in and removes the camps. Under this amended ordinance, no person is allowed to cross the barrier without authorization from the city official or the contractor on site. Crossing the barrier without permission can result in a misdemeanor charge or a $250 citation. The ordinance also includes a clause that shields city officials or contractors from personal liability for any damage they do during an abatement.

The lawsuit notes that these encampment sweeps often involve destroying homeless people’s items and can sometimes involve excessive force. City officials sometimes take or destroy tents, clothing, food, identification documents, pets, and other personal belongings during such sweeps, according to the complaint.

Advocates, journalists, and regular citizens simply wishing to document the city’s actions sometimes come to the sweeps. The ACLU NorCal complaint says this ordinance punishes people engaging in “advocacy, speech, expressive conduct, and association” during encampment sweeps and protects the government from liability for wrongdoing.

Dez Martinez, one of the plaintiffs in the case and founder of homeless advocacy organization We Are Not Invisible, often goes to encampment sweeps and covers them, uploading the recordings online, while also providing assistance to the homeless people involved. In one sweep Martinez went to, city workers began placing homeless people’s belongings in unmarked black bags, promising to either deliver the belongings or store the items for safekeeping. Martinez pleaded for the workers to label the bags, but they did not do so. The belongings were only labeled after Martinez obtained a pen from one of the workers and labeled them herself, according to the complaint.

The lawsuit argues that public observers like Martinez can compel city officials to act with greater care. One homeless person quoted in the complaint said, “These people would walk all over us without Dez. When she is there, she gets out her camera and they behave.” In addition to that, “people have the right under the First Amendment to film officers conducting official business in public,” Chessie Thacher, a senior staff attorney at the ACLU NorCal, tells Reason.

Public scrutiny and fear of liability is essential for government accountability, and this new ordinance provides Fresno’s government with a tool to hide their misconduct and avoid liability of wrongdoing, says Thacher.

The Fresno City Attorney’s Office did not respond to Reason‘s request for comment.