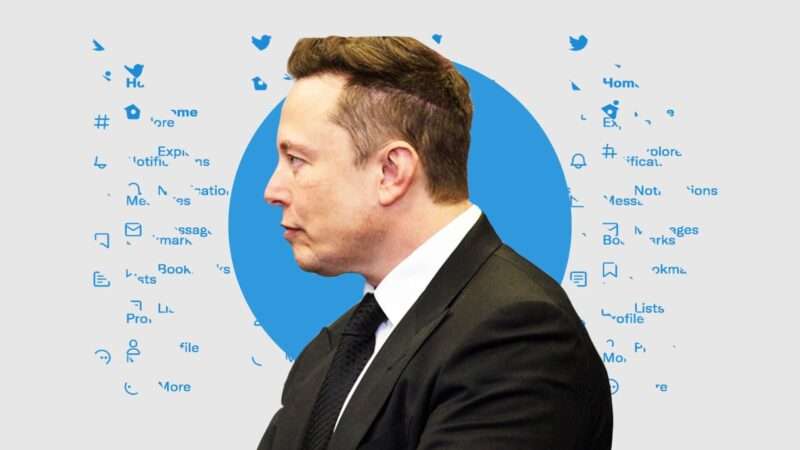 News Thursday morning that the outspoken serial tech entrepreneur Elon Musk has offered to buy Twitter and take it private has surfaced widespread anxieties within the knowledge-class industries that free speech and even societal peace will be jeopardized if the Tesla CEO lifts content restrictions from journalists’ favorite social media platform.

“I am frightened by the impact on society and politics if Elon Musk acquires Twitter,” wrote Max Boot, columnist for The (Jeff Bezos–owned) Washington Post, on Twitter. “He seems to believe that on social media anything goes. For democracy to survive, we need more content moderation, not less.”

Boot is a longtime apocalyptic troll—past lowlights include declaring that “I would sooner vote for Josef Stalin than I would vote for Donald Trump,” and advocating the Federal Communications Commission go after Fox News to forestall “the plot against America.” But his anxiety about allegedly unfettered free speech is revealingly common in media, academia, Silicon Valley, and the government.

“For somebody with a lot of money to just come in and say, ‘Look, I’m going to buy a part of this company, and therefore my voice as to how your rules are adopted and enforced is going to have more power than anybody else’s’ — I think that’s regressive after years of [Twitter] trying to make sensible rules,” University of California, Irvine, law professor and former United Nations Special Rapporteur on the Promotion and Protection of the Right to Freedom of Opinion and Expression David Kaye was quoted in Vox on Tuesday. “Twitter has stepped away from this idea of it being the free speech wing of the free speech party, and being a more realistic custodian of speech on the platform.”

Those “realistic” and “sensible” rules Twitter has adopted include banning thousands of political provocateurs (including then-President Donald Trump in 2021), suspending entire news organizations for publishing stories that turned out to be largely true, creating warning labels for COVID-19 “misinformation,” strengthening filters for allegedly threatening speech, and so on.

“After all that, bringing Musk onto the board seems like a big step backward,” former Reddit CEO Ellen K. Pao wrote last week in The Washington Post. “Musk calls himself a ‘free-speech absolutist,’ but like many ‘free speech’ advocates, he willfully ignores that private companies are free to establish some limits on their platforms.”

At the core of these objections is the notion (misguided, in my view) that social media platforms, once they achieve a certain ubiquity, should be treated less like private companies, and more like utilities—subject to robust government regulation in the name of both the greater good and the protection of historically disadvantaged minorities.

“Musk’s appointment to Twitter’s board shows that we need regulation of social-media platforms to prevent rich people from controlling our channels of communication,” Pao wrote. “For starters, we need consistent definitions of harassment and of content that violates personal privacy….If platforms continue to push for growth at all costs — without such regulations — people will continue to be harmed. The people harmed will disproportionately be those who have been harmed for centuries — women and members of marginalized racial and ethnic groups. The people who benefit from unrestricted amplification of their views will also be the same people who have benefited from that privilege for centuries.”

The notion that unfettered speech hurts minorities hardest, therefore justifying protections against hate speech, is belied both by the history of the gay civil rights movement in America (as spelled out in Reason by Jonathan Rauch), and also by the experience in 1930s Germany, as Jacob Mchangama, author of the recent Free Speech: A History From Socrates to Social Media, explained in February to Nick Gillespie.

But those Hitler analogies can be just too tempting to fact-check. “Today on Twitter feels like the last evening in a Berlin nightclub at the twilight of Weimar Germany,” tweeted City University of New York journalism professor Jeff Jarvis, who has otherwise spent much of the last two decades celebrating the “death of the gatekeeper.”

Musk, love him or hate him, makes for an odd authoritarian. An immigrant who built a fortune on clean-energy companies, an entrepreneur who (along with competitors) showed what nongovernmental industry can accomplish in space, the pot-smoking former Saturday Night Live host has shown zero interest in running for public office or recruiting jack-booted thugs to enforce his preferences. And yet it’s not just silly lefties like Robert Reich comparing the guy to actual evildoers.

“The world’s richest man — someone who used to be compared to Marvel’s Iron Man — is increasingly behaving like a movie supervillain, commanding seemingly unlimited resources with which to finance his mischief-making,” Felix Salmon wrote in Axios.

Perhaps ironically, the social-media-as-public-utility mindset is being embraced not just by a growing number of left-of-center knowledge-class professionals, but by some of their antagonists in the nascent trad-con right. “Twitter should be a public utility controlled by a rightly-ordered state,” Harvard law professor Adrian Vermeule tweeted today. “Short of that, I’m not sure I care which particular billionaires use it as an ideological playpen.”

Populism of all ideological flavors tends to treat not just government but constitutional principles as instruments, to be used bluntly against ideological opponents. Twitter may have had some libertarian, anything-goes roots, but in the Trump era especially the company has become both the professional plaything and ideological piñata of the white-collar left.

Reich, helpfully, laid out the stakes this morning: “Trump must never be allowed back on Twitter.”

The post Gatekeepers Very Afraid That Elon Musk Will Remove the Gates From Twitter appeared first on Reason.com.