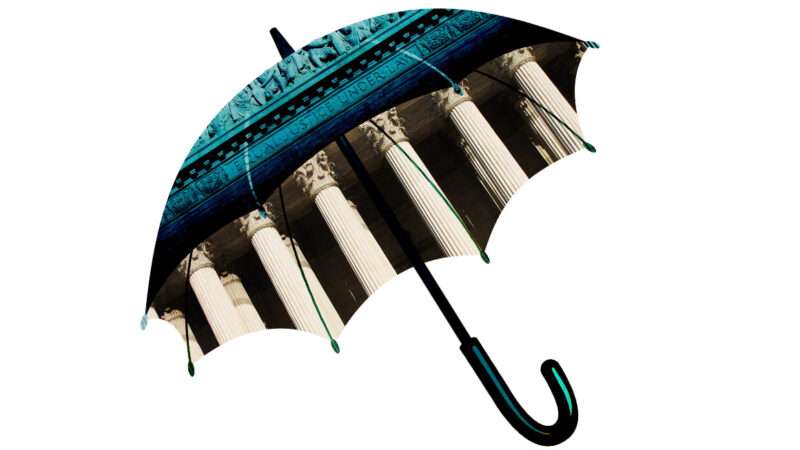 Several recent Supreme Court decisions have made it nearly impossible to sue a federal officer for alleged violations of constitutional rights. Now the Court is weighing a new case, Egbert v. Boule, that could continue this sorry trend.

Robert Boule is the owner of a bed-and-breakfast in Washington state near the Canadian border. Border Patrol agent Erik Egbert sought to question one of Boule’s guests, a Turkish national, about his immigration status. Boule told the agent to leave his property. Egbert refused, then allegedly shoved Boule against a car and pushed him to the ground, injuring his shoulder. After Boule complained to Egbert’s superiors, the agent allegedly retaliated by asking the IRS to investigate Boule, who was audited.

Boule sued Egbert in federal court under Bivens v. Six Unknown Named Agents of the Federal Bureau of Narcotics, a 1971 decision in which the Supreme Court said federal officers can be held civilly liable for violating people’s constitutional rights. Unfortunately, the Court has since narrowed Bivens to the point of practically overruling it.

In the 2017 case Ziglar v. Abbasi, for example, the justices said that when a Bivens claim arises in a context that is “different in a meaningful way from previous Bivens cases decided by this Court,” the presiding judge must search for any “special factors counselling hesitation” and toss the case if he finds them. “If we have reason to pause before applying Bivens in a new context or to a new class of defendants,” the Court emphasized in the 2020 case Hernandez v. Mesa, “we reject the request.”

Boule sued Egbert for violating his rights under the Fourth Amendment (by refusing to leave Boule’s property and using force against him) and the First Amendment (by retaliating against Boule’s constitutionally protected criticism of the agent’s actions). Boule won at the U.S. Court of Appeals for the 9th Circuit, which said any hesitancy about letting this Bivens claim proceed was “outweighed by compelling interests in favor of protecting United States citizens from unlawful activity by federal agents.”

The Supreme Court is reviewing that decision, and its recent hostility toward recognizing new Bivens claims does not bode well for Boule, or anyone else interested in seeing rogue federal officers held civilly accountable. As 5th Circuit Judge Don Willett lamented in a similar case in 2021, the Supreme Court has so undermined Bivens that “redress for a federal officer’s unconstitutional acts is either extremely limited or wholly nonexistent, allowing federal officials to operate in something resembling a Constitution-free zone.”