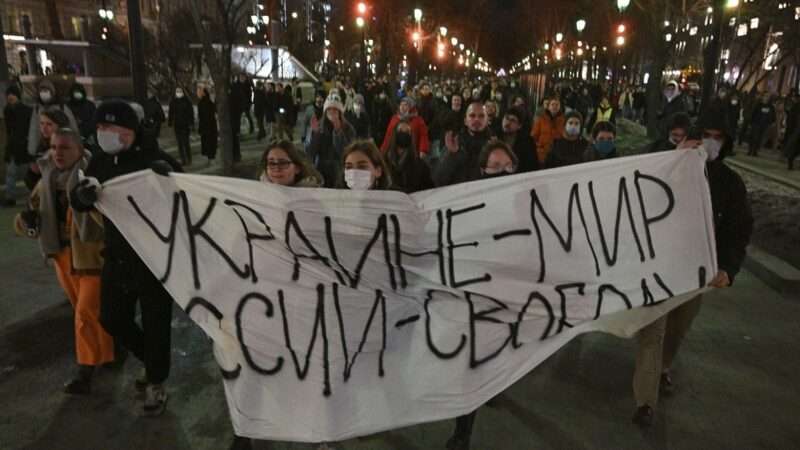 A few days ago, I put up a post expanding on economist Timur Kuran’s idea of combating the Russian invasion of Ukraine by granting asylum to Russian troops who surrender, thereby increasing incentives to desert. Canadian political commentator Scott Gilmore offers a much broader version of the same idea, one that isn’t limited to soldiers. He suggests Western nations take a wide range of steps to encourage  Russians to join with us in opposing Putin:

And, unfortunately, this historically harsh set of sanctions has failed to move Putin….

Perhaps, then, the west should consider an alliance wide-strategy of offering a million little carrots aimed not at Russia, but at Russians.

For example, the Ukrainian government is now promising Russian deserters 5 million rubles (approximately US $47,000), which is 450 times more than what the Kremlin pays the families of soldiers killed in action. NATO and the EU could match that and add an offer of asylum for them and their families….

Even if each deserting Russian soldier was offered a huge bounty, say $100,000, it would still be incredibly cost effective when you weigh it against the price of supporting a protracted war, or the cost in men and material to remove that soldier from the battlefield in the traditional fashion.

This strategy could be applied more widely. For example, some of these million little carrots could be offered to Russian diplomats. We have already seen at least one resign in protest, but there could be hundreds more if the western alliance also dangled in front of them a path to citizenship and a stipend to cover living costs. This may seem unfair, but the world needs to be pragmatic about this and realize that bigger fish will require larger bait.

For senior military staff or Kremlin officials in Moscow, maybe even notable journalists or celebrities, we could also offer a path to citizenship and an even larger stipend….

But for them and all the rest, there would be one very important catch. All of these little carrots would require a recorded video statement explaining their opposition to the war and urging others to join them.

If thousands of these testimonials were shared in the media and online, coming from powerful Russians and lowly conscripts both, it would be almost impossible for the Kremlin to control the narrative domestically. It would be a body blow to morale, and it would handicap further attempts at disinformation and propaganda.

But, most importantly, a million little carrots strategy would remove Russian boots on the ground. If you consider the slow progress of the Russian military after (according to Pentagon estimates) 90 per cent of the troops assigned to this invasion have already been deployed, it is clear that even a small number of deserters will have a disproportionately large impact on Moscow’s ability to fight this war….

I agree with most of Gilmore’s points. But I would make the video optional rather than mandatory. Some potential deserters or defectors might fear to make the video, because possible retaliation against their families back home. In addition, the video would be less credible if Russian viewers find out (as they likely would) that it was a mandatory condition of getting asylum in the West.

The strategy of incentivizing Russians to come over to our side can be broadened still further, by offering an open door to Russian migrants, including those who are not high government officials, oligarchs or celebrities. Ordinary people, particularly those with useful scientific technical skills, are still of value to the Putin regime. Better to have them on our side instead. I will have have more to say about this point in an op ed in the New York Times, which is expected to be out on Tuesday. Among other things, it will address a number of potential objections.

This approach should be supplemented by doing everything reasonably possible to avoid sanctions and “cancellations” aimed at ordinary Russians, especially those who oppose Putin’s regime. There is good reason to take steps that deny resources to the government (such as freezing Russia’s central bank assets abroad) and penalize its high officials and collaborators. But, for both moral and strategic reasons, we should minimize collateral damage to innocent civilians. Political scientist Yascha Mounk makes some good points on this in a recent Washington Post article:

Although we are waging a righteous battle against Vladimir Putin, we are not at war with the Russian people. Acting as if we are is as immoral as it is counterproductive….

Putin undoubtedly enjoys widespread support. But over the past week, many Russians have found the courage to criticize his assault on Ukraine, often incurring tremendous risk in the process.

Thousands have already been arrested for protesting the war. About 7,000 Russian scientists and academics have signed an open letter demanding “an immediate halt to all military operations directed against Ukraine.” Similar petitions are circulating among teachers, doctors and many other groups. What appears to be the biggest one, on Change.org, has attracted over a million signatories.

Even more Russians share these sentiments but lack the bravery or the opportunity to speak out….

All of this drives home the importance of continuing to draw the vital distinction between the Russian government and the Russian people — something that many pundits, politicians and institutional leaders are, sadly, failing to do….

Heavy sanctions will unavoidably impose significant costs on ordinary Russians. But since they are necessary to assist Ukraine and weaken Putin, they are morally defensible. It is right to stop doing business with Russian companies, to seize the property of oligarchs who got rich thanks to their connections to the Kremlin, and to ban sports teams from competing in international competitions under the Russian flag….

But none of this is a reason to punish individuals for the accident of their birth or to cast Russia’s rich culture under a general pall of suspicion. Dictators do not speak for everybody who shares their nationality. And so we must avoid punishing ordinary Russians who neither have close links to the Kremlin nor represent their country in an official capacity. It would be a serious injustice to stop Russian academics from giving talks in the West, to subject every Russian living outside the country to an ideological litmus test or to cancel performances by Russian artists based purely on their nationality.

As Gilmore and Mounk explain, differentiating between Russia’s government and its people is not only morally right, but also a good way to counter Putin’s propaganda and weaken his regime’s position.

Like the Cold War against the Soviet Union, the conflict with Putin is not just a military confrontation decided by material factors, but also a war of ideas and ideologies. The ideology of liberal democracy ultimately triumphed over communism. It can also prevail over Putin’s brutal authoritarian nationalism. Indeed, the latter probably has a much weaker appeal than communism did, at the height of the latter’s influence. Putin’s “Russian world” is far less enticing than the utopia of freedom and limitless abundance once promised by Lenin and Stalin. But we are far less likely to win if we alienate large numbers of potentially sympathetic Russians by unnecessarily lumping them in with the enemy.

The “million carrots” strategy is not a complete substitute for sanctions against the Russian state and providing military aid to Ukraine. But it can help increase the effectiveness of these other measures, and at little cost. Indeed, Russian defectors, immigrants, and military deserters, can make valuable contributions to Western economies and societies, as have previous generations of Russian immigrants during the Soviet era, and before. This is another point I will cover in greater detail in my forthcoming New York Times article.

The post How to Fight Putin by Offering Russians "a Million Little Carrots" appeared first on Reason.com.