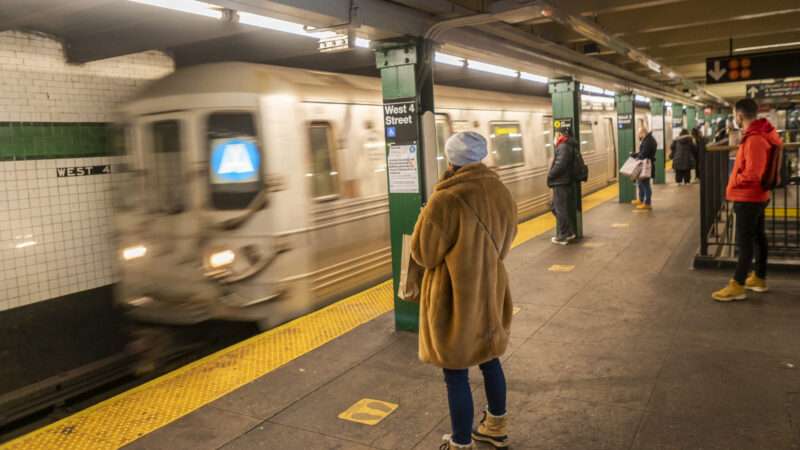 Yesterday, a gunman in a gas mask and a worker’s vest opened fire on the New York City subway, in Brooklyn’s Sunset Park, and shot at least 10 people, injuring 23 and sending many people to the hospital.

It was a terrible tragedy made worse by the fact that the police still have not caught a suspect, and that cameras inside the subway station—which should be in working condition and able to aide the search for the shooter—were non-operational.

It’s also been an opportunity for journalists to float terrible ideas for new security theater measures, prompting New York City Mayor Eric Adams, who has shown himself to be fairly pliable, to lend credence to them.

“Is the time now to consider putting in something like metal detectors to prevent people with weapons and metal and this kind of thing from getting into the train?” Maurice DuBois, an anchor for CBS New York, asked Adams last night. “People just need to feel safe. Is that one of the answers?”

“I truly believe that and, you know, I’m often criticized when I talk about technology being used to identify those who are carrying illegal guns,” said Adams, awkwardly pivoting after agreeing. “This is why I’m sending my deputy mayor of public safety to scan the entire country and globe to find ways that we can identify guns. We must marry technology with safety, and I’m willing to do so.”

“After all, people use it at Yankee Stadium, at office buildings, at the Garden [referring to Madison Square Garden], on and on and on,” continued DuBois. “You have to wonder, why not the subway?”

“You are right,” replied Adams. “We’ve found a few ways that it could be used.” A communications person for the mayor has since walked back Adams’ comments.

Watching the exchange, it looks like DuBois is pushing Adams to agree to a policy without considering whether it’s possible to implement it, and that Adams obliged him as a show of concern.

But the problem here was not lack of gun control laws—New York City makes it incredibly hard to legally carry a gun on your person—or lack of metal detectors. The problem was that an evil person did a vile thing, which is a risk you necessarily run when living among 8.5 million other people.

Metal detectors, or—God forbid—TSA-style agents manning them, asking to search people’s bags as they enter any one of the city’s 472 subway stations, would be a logistical nightmare. No New Yorker in their right mind would want to pull out their laptop, cell phone, vape pen, or whatever other metal-containing items they might have on their person, flashing their electronics around, showing other subway riders what could be snatched from them later on in the journey.

The subway has an average weekday ridership of about 5.5 million people (or at least it did prior to the pandemic; the bounce-back has been tough to quantify), most of them moving quickly to catch their trains and commute to or from work. Not only would TSA-style searches need to move quickly and manage astonishing volume, but they’d also need to be available 24/7, as New Yorkers sometimes take the train home at 3 a.m. in questionably cogent states. Inviting more interactions between harried citizens and cops, or harried citizens and TSA-type agents, is a recipe not only for petty conflict to emerge and escalate, but also for law enforcement to arrest people for illegal but mostly harmless things (like drugs).

When this type of security theater was tried in Washington, D.C., back in 2010, it was a colossal failure. Designed to screen people acting “suspiciously,” straphangers ended up actually being allowed to opt out of the random searches. Organizers for Flex Your Rights, a nonprofit that helps people protect themselves when interacting with law enforcement, handed out flyers to inform D.C. residents about how to opt out of these searches. The searches never yielded much; over the first 18 months, zero arrests were made, but plenty of Metro riders complained about agents rifling through their stuff.

Adams was right to quickly walk back his agreement that the MTA needs to be more like the TSA. When the Transportation Security Administration (TSA) was created in November 2001 following 9/11, it did not thwart scores of terrorists who were slipping through the cracks, but instead “has proven itself skilled at harassing travelers and freaking out over pocketknives and water bottles while steadfastly failing at its assigned task of making air transportation any safer,” writes Reason‘s J.D. Tuccille. In 20 years of existence, the TSA has yet to take credit for stopping a terrorist plot; it can’t even consistently detect explosives and weapons.

Too often, government officials use senseless acts of violence as a pretense to impose more surveillance and inconvenience on ordinary citizens who have no intention of committing terrible acts. They don’t end up catching criminals, who are often wily enough to evade existing laws—how did the Sunset Park shooter get a gun in New York City, after all?—but they do end up lowering everyone else’s quality of life, layering on restriction after restriction until urban life becomes more inconvenient than it’s worth. It’s like Adams and DuBois are trying to drive people out of the greatest city in the world.