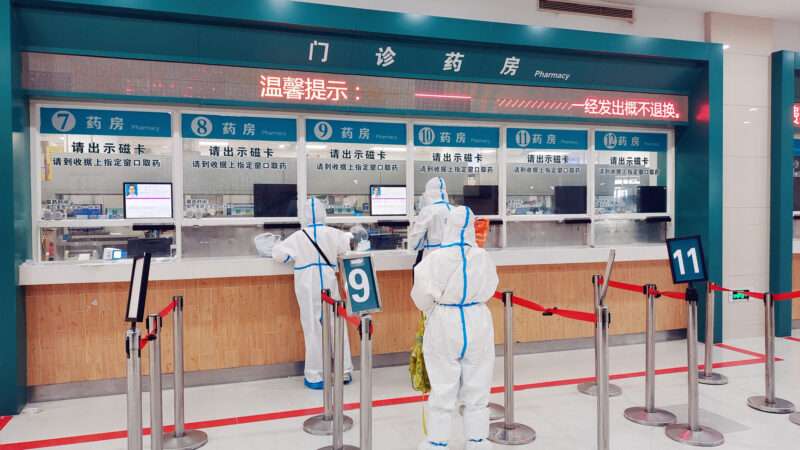 In Shanghai, 25 million people remain locked down as 26,087 new COVID cases were reported on Sunday.

The situation has grown increasingly dire: Two people who tried to leave their apartment to walk their dog were confronted by a COVID prevention worker who they ended up attacking. At least one man allegedly tried to get the cops to apprehend him so he could at least have food to eat. Meanwhile, people who end up in central quarantine—state-administered facilities where COVID-positive people are sometimes sent so others in their apartment buildings don’t get sick—complain about the fact that it’s so unhygienic, it may well be facilitating greater spread of the virus (or even reinfection). Shared rooms, no running water, broken toilets (or disgusting ones shared by hundreds of people), and people crammed into overflow beds in hospital hallways have grown to be expected by the city’s increasingly angry residents.

There've now been many videos showing Shanghai healthworkers' aggression & violence towards people/pets, but it works both ways. Frustrations are building. This healthworker was allegedly attacked after stopping these two people who went outside to walk the dog against the rules. pic.twitter.com/WwAbbIcmqs

It's not so much that many people oppose centralized quarantine, it's just that the situations at many Shanghai facilities are so bad: lack of supplies, lack of staff, lack of hygiene. These photos were posted on Weibo by a Shanghai resident quarantined in Pudong today. pic.twitter.com/mWQUed3T7A

The degree of desperation is epitomized by this clip from a few days ago. This young man called the police saying that his family had run out of food for four day. He wanted to go to the police headquarters and be apprehended so that he would be fed.

"I know many people don't believe me, if I didn't know it first hand, I wouldn't believe you if you told me that in 2022, people in a cosmopolitan city can't buy food every day and eating is a problem, but it's really happening." You can read the entire message in English

This is all after reports emerged that parents were being separated from their COVID-positive children (a policy officials claim has been altered, with parents now allowed to apply to remain with their sick, minor children). Meanwhile, last week, a graphic video went viral on Chinese social media of a COVID prevention worker killing a family’s corgi dog in the streets.

Given the Chinese Communist Party’s (CCP) aggressive track record of censorship and tight media control, it’s noteworthy that so much information has leaked through what is termed the “Great Firewall”—China’s internet censorship apparatus—and made its way to the Western press. But this may be a somewhat deliberate tradeoff on the part of the CCP, recognizing that while they can’t fully suppress the horror scenes, they can scapegoat lower-level officials as a form of damage control instead.

“Chinese censorship is more complicated than just trying to stop negative information,” Jeremy Daum, senior fellow at Yale Law’s Paul Tsai China Center, tells Reason. The CCP has “made announcements about cracking down on ‘rumors,’ but to put a city as cosmopolitan and populous as Shanghai under total information quarantine would probably be impractical and counterproductive,” he says. If the city’s residents were to feel “silenced,” that “would probably be more disruptive of social order and a bigger threat to stable government than letting people vent.”

“Censorship isn’t always a blunt tool,” says Daum, “especially when directed by higher-level authorities. They try to be cognizant of public opinion, because the goal is stability, and there has to be a cost-benefit analysis.”

Meanwhile, Guangzhou, a manufacturing hub home to more than 18 million people, looks disturbingly primed to follow in Shanghai’s footsteps, as COVID cases spread and travel to the city is sealed off.

The post Shanghai's Lockdowns Result in Starvation and Quarantine Enforcers Being Attacked appeared first on Reason.com.