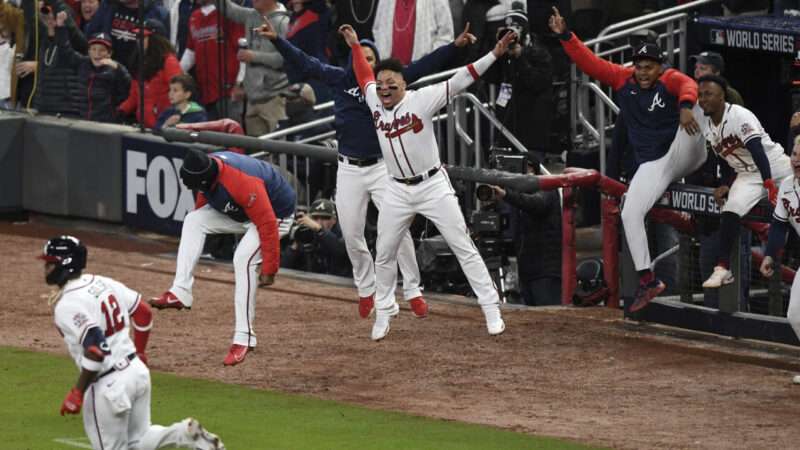 Though long balls may be flying out of Truist Park when the Cincinnati Reds and hometown Atlanta Braves play Thursday on MLB Opening Day, one thing we won’t be seeing is the economic dinger that the $672 million stadium was promised to bring.

When the stadium development was announced in 2013, its booster coalition of team executives, elected representatives, and business leaders pitched it as a “home run for Cobb County,” arguing the project would generate sufficient economic activity with associated tax revenues to cover the stadium’s costs with a bountiful surplus. This windfall thus justified the $300 million that Cobb committed to construct the stadium in order to lure the team from its downtown Atlanta stadium, Turner Field, built just 17 years earlier for the 1996 Summer Olympics.

Critics of the deal questioned why the public should shoulder a burden that the team’s corporate owner could easily cover, especially when economists overwhelmingly agree that stadiums cost taxpayers more than any economic benefits they might generate.

Subsidy advocates responded with a common refrain: “This time will be different!”

They argued that the uniqueness of the project rendered past experiences irrelevant. In addition to its favorable location at a major interstate junction that would make it accessible to non-Cobb residents, Truist Park would be part of a mixed-use development called The Battery Atlanta, transforming the area into a year-round commercial hub. As Atlanta Braves Development Company CEO Mike Plant described it: “We’re going to build a city and we’re going to create tons of jobs, tons of density and year-round tax revenues. And that’s what’s going to make this whole formula set a new standard and result.”

The rosy projections were supported by several preliminary economic impact studies commissioned by the Cobb Chamber of Commerce—a key backer of the deal—which claimed to show large fiscal returns from the project. However, consultant reports trying to forecast economic benefits are notorious for their faults (e.g., confusing all stadium-related spending as new spending, over/under-estimating benefits/costs, counting added taxes as a benefit instead of a cost), and rather than provide objective assessments they are intended to serve as public relations documents to justify taxpayer subsidies.

Now that five years have passed since the stadium has opened, speculative projections colored by wishful thinking can be replaced with analysis of hard data, which I have compiled in a comprehensive report. The findings are consistent with limited economic impacts identified in other stadiums, which contradicts the grand slam predictions of Truist Park’s economic homer-palooza.

Though Cobb sales tax revenue increased following the stadium’s opening, the uptick of around $3 million per year is quite small relative to the county’s $25 million annual funding burden of the stadium. Approximately one-third of Battery spending came at the expense of other Cobb businesses, as residents reallocated some leisure spending from local restaurants, bars, and shops to the stadium development. Thus, the gains have not been a boon to the entire community.

Cobb property values, both near the stadium and countywide, progressed similarly to other parts of metro-Atlanta, showing no distinct change after the stadium project was announced or opened. This doesn’t support the contention that being the “home of the Braves” made Cobb County a more attractive place to live and work, and thus increased property tax collections through greater tax assessments. Instead, Cobb has increased property tax rates since the stadium was announced in 2013.

County budget documents show that Cobb runs a deficit of about $15 million per year to fund its stadium obligations, which translates to about $50 per household. This may seem like a reasonable cost to baseball fans like me who benefit from having an MLB team nearby; however, it’s far from the revenue that was promised.

Cobb County’s experience is an important example that demonstrates stadium subsidies are bad public policy. Even though Truist Park was primed to succeed with a favorable location and ancillary development, it was unable to overcome the dismal economics of stadiums. If Truist Park can’t generate a positive return with all its advantages, then it is unlikely that any other stadium will either.

The findings are troubling given current trends in stadium subsides and construction across the country. Teams tend to replace their stadiums after 27 years, which is about how long it has been since our last stadium construction boom. Unfortunately, taxpayer funding for sports arenas and stadiums has been on the rise in recent decades:

Since 1970, state and local governments have devoted $33 billion in public funds to building sports venues for major professional sports teams, and the average contribution is growing. NFL teams in the Buffalo, Nashville, and Washington areas are seeking subsidies for new stadiums approaching $1 billion each. These projects are likely just an early swell in a coming wave of stadium replacements, for which team owners are sure to seek public assistance.

The economic benefits of stadiums are nothing more than a tired trope used to goad the public into funding corporate welfare. It’s past time to acknowledge that sports stadiums are poor channels for economic development and stop funding them.

The post The Atlanta Braves Won the World Series. Their Stadium Is Still a Taxpayer Boondoggle. appeared first on Reason.com.