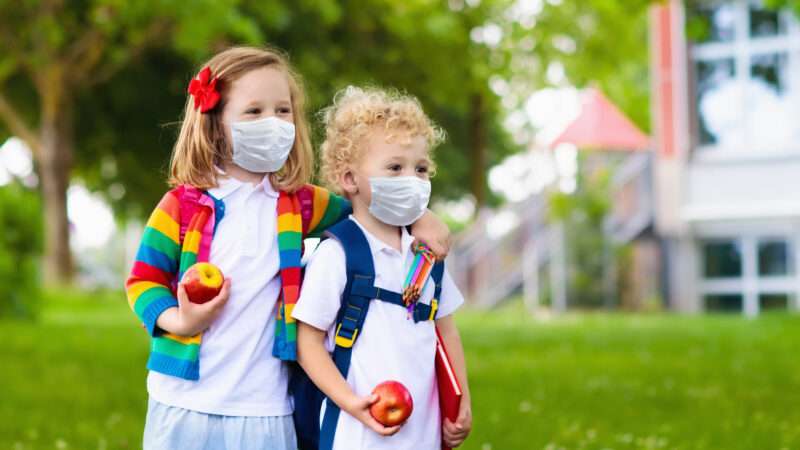 On March 16, Washington, D.C., became one of the very last major metropolitan areas in the country to finally end mask mandates for students. According to Mayor Muriel Bowser, a Democrat, kids who attend D.C. Public Schools (DCPS) no longer have to wear masks.

That’s not always what happens in practice, of course. Earlier this week, Vice President Kamala Harris visited Thomas Elementary School, a public school, and posed for photos with kids. Every single child who participated in the photo op wore a mask, but Harris did not.

Thomas Elementary did not respond to a request for comment about its masking policies, so it’s not clear if the school actually requires masks. If so, the school would hardly be alone in keeping a mask mandate in place. In fact, many of the city’s public charter schools—which are overseen by a school board that is separate from DCPS—have kept mask mandates in place. Indeed, several have no plans to ever end the mandate, a source of tremendous frustration for some parents.

“Our principal told us that right now masks are still required indoors for all students,” says Lindsay Elman, a mother of a child at Mundo Verde Bilingual Public Charter School.

Mundo Verde is one of five D.C.-area foreign language immersion charter schools that run from kindergarten through fifth grade. They are feeder schools for District of Columbia International School (DCI), which teaches sixth through 12th grade. And they are, by and large, keeping mask mandates in place.

DCI itself is sticking with an indoor mask mandate. And students only gained the right to go maskless outdoors as recently as March 28—last week.

“They wore them during sports, outdoor track was masked,” says Lauren Peterson, a mother with three kids—twin seventh graders and a 10th grader—at DCI. Her fourth and youngest child attended school at Elsie Whitlow Stokes, another D.C. charter, but Peterson pulled the kid due to uncertainty about the mask mandates ever going away for good.

Yu Ying Charter School, a Chinese-English dual language charter, is waiting until April 25 to end the mask mandate. Yu Ying is also enforcing a travel quarantine: Unvaccinated students—a category which includes virtually all the pre-K students—and their immediate family members are forbidden from leaving the D.C.-Maryland-Virginia area. If they do leave, they must abide by a 7–10 day quarantine period.

The fact that these policies are far stricter than what the Centers for Disease Control and Prevention (CDC) recommend is not lost on families with kids in these schools.

“Parents are not really allowed in the building for any reason,” says Paul Fraioli, a parent. “Up until a month ago, they wanted to have the objects people touched sanitized.”

The parents interviewed for this article expressed frustration with school administrators who had pledged to do exactly what CDC guidance and the scientific consensus believed was right, but abandoned this course of action once health experts conceded that de-masking was safe enough.

“For the past two plus years, we followed the science like it’s the bible, and now people’s irrational fears are taking over these policy decisions,” says Elman, the DCI parent.

Fraioli points out that the CDC is moving away from raw case numbers as the relevant COVID-19 metric: What really matters to federal health officials is the hospitalization rate. But Yu Ying is focused on community spread—case counts—to determine its COVID-19 policies. The school’s health and safety plan notes that even the outdoor mask mandate will be brought back if the community spread level increases from low to medium. The plan also includes outdated recommendations that unnecessarily warn students and staff to avoid touching their masks and to wash their hands if they do.

“Be careful when taking off their mask and wash their hands after removing it,” the plan reads. “Store the mask out of anyone’s reach. Use a clean mask if someone touches the one they’re currently wearing.”

Yu Ying declined to offer comment for this article; none of the other schools responded to requests at all. Fraioli, Elman, and Peterson said the strict policies largely reflect the preferences of the staff rather than the parents. Many teachers indicated in surveys that they were only comfortable working in the schools if the mask mandate remain in place—even though virtually all teachers are vaccinated, as are most students. Kids, whether vaccinated or not, are at extremely low risk of severe COVID-19 health outcomes.

It’s true that the point of charter schools is to offer families choices beyond what the traditional public school system provides. In theory, some charters could serve as enclaves of greater COVID-19 enforcement, matching more cautious parents with teachers and educational environments that are aligned with their preferences. If more kids—preferably, all kids—had the option to benefit from school choice programs, then students and parents could sort themselves into the schools that fit their comfort level.

Unfortunately, we are a far cry from that reality. Most kids are obligated to attend a specific public school assigned to their ZIP code, and teachers unions across the country have constituted a powerful interest group in favor of keeping public school students masked—and, until recently, in virtual classrooms. Randi Weingarten, president of the American Federation of Teachers (AFT), has previously stated that she wanted to see “no transmission in schools” at all before she would support the removal of masks.

D.C.’s public charter schools are generally not unionized, though Mundo Verde opted to join AFT two years ago, in the middle of the pandemic. In any case, it’s disappointing that the somewhat different governing structures of DCI, Yu Ying, and other schools in their cohort have not produced better results from the standpoint of mask-and-distancing-weary families.

The post The D.C. Public Charter Schools Where Masks Are Still Mandatory appeared first on Reason.com.