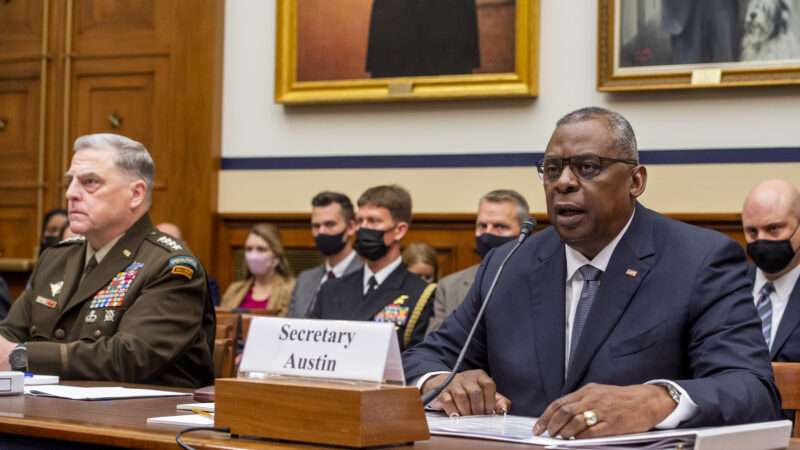 On April 5, Defense Secretary Lloyd Austin and Chairman of the Joint Chiefs Mark Milley testified at the House Armed Services Committee about the Biden administration’s $813 billion defense budget request for the coming fiscal year. Lawmakers were focused largely on the top-line number, with many excoriating the administration for failing to account for rising inflation.

Yet there wasn’t much discussion about strategy—like what the U.S. hopes to accomplish in various regions of the world, how it intends to accomplish those goals, and whether the goals themselves are truly necessary to keep the United States safe. By focusing on the numbers rather than the strategy, policy makers make the costly mistake of assuming the strategy underwriting the budget is a worthwhile investment.

Every year, the debate over the defense budget is entirely predictable. The White House releases a pitch for a certain amount of money, which is usually lambasted as too small. Lawmakers ensure defense-related jobs in their districts are protected and their favorite weapons systems aren’t decommissioned. After months of wrangling, Congress authorizes defense programs and appropriates the funds. By the time the process is over, tens of billions of dollars are added to the already colossal amount requested by the president.

For all intents and purposes, the defense budget process runs on autopilot because policy makers in Washington don’t bother to challenge their assumptions. They fail to ask themselves the most fundamental questions: Is the strategy of primacy working for the United States? And is there an alternative strategy available that is more efficient for taxpayers and less risky for the country?

There is stagnation because developing a better strategy would require a significant break from the status quo that has dominated U.S. foreign policy for over 30 years.

At present, the U.S. remains committed to staying firmly on top of the so-called international system. Geopolitical competitors are to be vanquished or pressured into submission rather than managed. At its core, primacy is centered on maintaining U.S. dominance in all regions of the world, lest anarchy rears its ugly head or adversarial powers seek to fill the security vacuum. In the primacist view, either the U.S. preserves its dominant status, or the world becomes a far more dangerous place.

Primacy, however, doesn’t come without costs.

In the 1990’s, the U.S. was the indisputable leader of the international system, living in a world with no significant competitors. But Washington is no longer operating in a unipolar world. China, which during the tail end of the Cold War was still an undeveloped country with subpar military capabilities, is now one of the most powerful countries on the planet. To use one metric of state power, China’s GDP has grown from slightly over $1 trillion at the beginning of the century to over $17 trillion last year. Additionally, China’s military budget is expected to reach $230 billion this year, still significantly smaller than America’s $782 billion military budget. This increase in military spending finances an impressive campaign of military modernization. As a consequence, China is now a major player in East Asia that is seeking to translate its economic wealth into geopolitical influence commensurate with a great power.

To think the U.S. can turn back the clock to 1989 or compel Beijing into surrendering its core interests is wishful thinking at best, and would court escalation at worst. In today’s complicated geopolitical landscape, primacy is an unsuitable strategy.

Primacy is a resource intensive strategy that’s impossible to accomplish on the cheap. If the goal is to sustain a large-scale troop presence in multiple regions simultaneously, then the defense budget will inevitably increase year-over-year. A near-permanent deployment schedule undermines the health of the force in the long run as capabilities wear thin. This, in turn, forces Washington to appropriate even more money for maintenance, readiness, training, and procurement. For readiness alone, the Biden administration is seeking more than $134 billion, which is nearly as much as Russia spends on its entire military.

Finally, primacy also assumes higher risk. This isn’t surprising; the more bases and outposts the U.S. operates, the more likely U.S. forces will be drawn into conflicts that have nothing to do with U.S. security interests. And U.S. allies and partners won’t take their own defense seriously knowing that the U.S. is alway there to bail them out. If the defense budget seems astronomically high, it’s because Washington subsidizes the defense of wealthy allies like Germany, a country that was only just recently shocked into a defense spending increase due to Russia’s invasion of Ukraine.