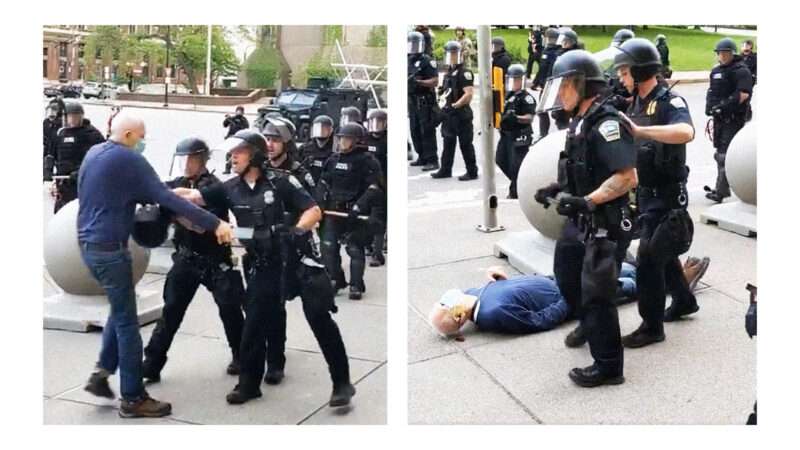 The last two years brought a public reckoning around public sector unions, the collective-bargaining groups that represent workers in government positions. A recent story reminds us why.

On June 4, 2020, 75-year-old Martin Gugino captured much of the nation’s attention after a clip showed the man walking up to police officers at a protest in Buffalo, New York, and talking with them briefly before two officers shoved him to the ground.

An arbitrator—hired by the Buffalo Police Benevolent Association, the police union—announced last week that Officers Aaron Torgalski and Robert McCabe acted judiciously when they pushed Gugino to the pavement, after which point blood is seen gushing from his head as he lay on the sidewalk. Whether one officer applied more force than the other is impossible to tell, but the video shows the two pushing Gugino in tandem before he trips backward and falls.

“Gugino, after the force was applied to him, appears to have not been able to keep his balance for reasons that might well have had as much to do with the fact that he was holding objects in each hand or his advanced age,” wrote Jeffrey M. Selchick, who also notes that the officers were worried about Gugino getting close to their “bare skin” in the case that they might catch COVID-19.

“It was an acrobatic exercise to avoid what the world saw,” Melissa D. Wischerath, an attorney for Gugino, tells Reason.

The video is here, and you can decide for yourself. But the main issue isn’t the decision per se. It’s the inevitability of it.

A core function of police unions—and of any union, really—is to defend their workers, even when that means sticking up for distasteful behavior. That becomes a bit more complex when the union is tasked with defending the worst actions taken by those who hold the monopoly on force and power.

As a part of that function, many unions have sought to make it as difficult as possible to discipline those within their ranks when they may be out of line. That’s no different in Buffalo, which quite literally “bargained away the ability for the city to discipline,” notes Wischerath. Instead, when their employees are accused of potentially violating policy, the municipality can pursue a private arbitration process where each entity finds an arbitrator to make an unappealable decision. In this case, the city and the union jointly selected and financed Selchick’s participation, who, according to Wischerath, is a known quantity. “Even if you know it’s coming, it’s still shocking to read,” she says.

This sort of thing isn’t new. Up the road in Rochester, New York, a group of cops last year pepper-sprayed and handcuffed a nine-year-old girl, who, for the record, was not suspected of committing any crime. The police union responded that such force was necessary to detain a child. There are many such stories.

Criticism of police unions over the last couple of years has primarily come from the left, it seems. But they aren’t the only collective-bargaining groups taking heat. Teachers unions have been thrust under the spotlight as well, accused by the right of overplaying their hand in prolonging measures like remote learning during the COVID-19 pandemic. Both entities have much in common: monopoly control over a public good and a penchant for prioritizing themselves at the direct expense of the people they are charged with serving. Yet, in our tribal political landscape, that close Venn diagram is unfortunately lost on many.

The post Two Cops Will Not Face Discipline For Pushing a 75-Year-Old to the Ground. You Can Thank the Police Union. appeared first on Reason.com.