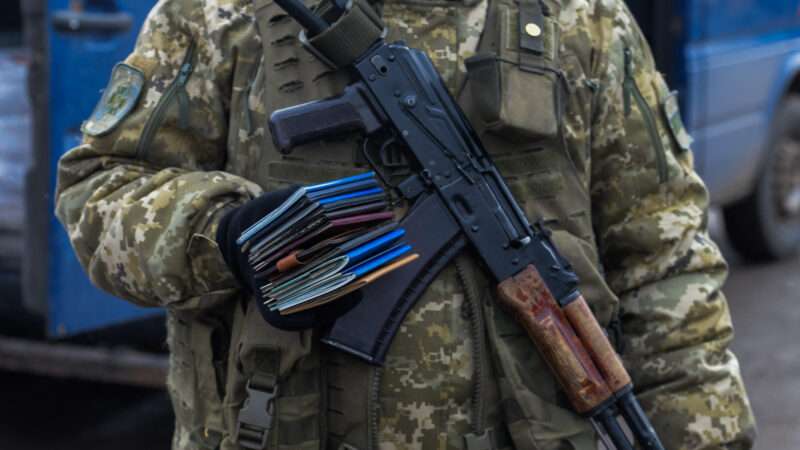 The Ukrainian leader seeking the free world’s help to fight off a Russian invasion is refusing to allow Ukrainian men to flee with their families to safety.

“The Ukrainian government has mandated that men aged 18 to 60 are not allowed to leave the country,” The New York Times reports.

A CNN report on February 24, the day Ukrainian President Volodymyr Zelenskyy declared martial law, quoted a statement from Ukraine’s State Border Guard Service. It declared that so long as martial law remained in effect, “it is forbidden for men aged 18-60, Ukraine citizens, to leave the borders of Ukraine.”

This policy is inhumane, as it has effectively forced the separation of families. When the Trump administration separated children from parents at the Mexican border, a vast uproar ensued over the cruelty of the policy. Future U.S. President Joe Biden denounced Trump’s policy as “outrageous.” Rather than condemning Zelenskyy’s policy, though, Biden has directed $1 billion of American military aid to Ukraine and portrayed Zelenskyy as representing the side of freedom in the conflict.

“In the contest between democracy and autocracy, between sovereignty and subjugation, make no mistake: Freedom will prevail,” Biden said February 24. “God bless the people of a free and democratic Ukraine.”

How “free” is any country where you aren’t free to leave?

The Zelenskyy non-elderly-men-can’t-leave policy violates at least three provisions of the Universal Declaration of Human Rights. Article 13 states, “Everyone has the right to leave any country, including his own.” Article 9 states no one shall be subjected to arbitrary arrest or detention. Article 7 states, “All are equal before the law and are entitled without any discrimination to equal protection of the law.” In Zelenskyy’s Ukraine, men aged 18 to 60 are being arbitrarily detained. They are being discriminated against on the basis of their sex and age.

The freedom to leave was one of the most fundamental distinctions between the free world and the Soviet bloc during the Cold War. At the Berlin Wall, East German border guards shot those trying to flee communism to West Germany. Jewish “refuseniks,” denied permission by Soviet authorities to emigrate to Israel or to the United States, were the focus of a bipartisan and grassroots advocacy effort that played an important role in the eventual defeat of the Soviet Union. Cubans and Vietnamese alike risked their lives to flee communism in rickety boats.

Periodic proposals by Democratic politicians to impose exit taxes on American citizens have prompted me to recall the Reichsfluchtsteuer, the 25 percent tax that the Nazis imposed on Jews trying to flee Germany in the 1930s.

It’s one thing to be stirred by the Ukrainians voluntarily taking up arms to defend their democracy and national home from a Russian dictator. It’s another thing when it turns out the Ukrainian men don’t have the choice to leave if they want to.

The policy is counterproductive to the goals of peace and of an independent Ukraine. Russia can now claim, when bombing Ukrainian civilian targets, that the Ukrainian civilians remaining are men of fighting age. Allowing men to leave with their families would sharply increase the number of refugees, raising the motivation of Ukraine’s neighbors to push for a rapid peaceful resolution. Even the remaining Ukrainian fighters may be more likely to fight bravely if they are genuine volunteers rather than trapped conscripts caught between the pincers of the State Border Guard Service of Ukraine and the Russian army. It’s hard to condemn Russia for failing to leave exit corridors for refugees if those same exit corridors are blocked by Ukraine’s State Border Guard Service.

The women and children fleeing Ukraine face plenty of trauma already without Zelenskyy compounding the problem by taking husbands and fathers away from wives and children.

If Biden means what he says about “freedom will prevail,” he may want to ask Zelenskyy to give the dads and husbands who so desire the freedom to leave Ukraine.

The post Ukraine Can't Defend Its Freedom With an Army of Conscripts appeared first on Reason.com.