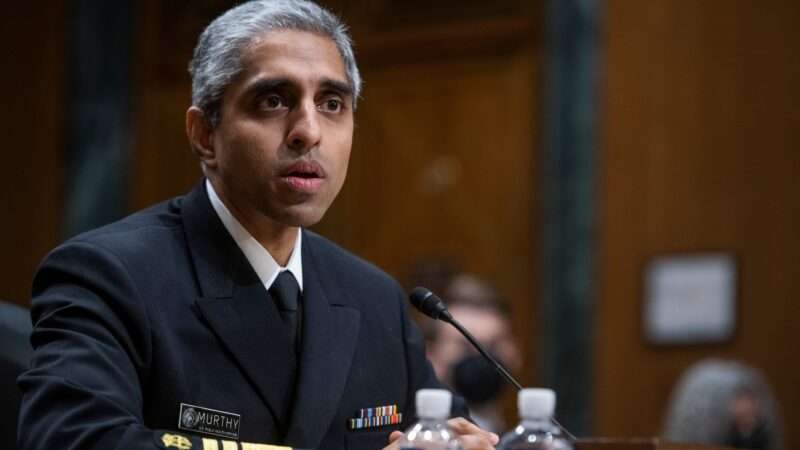 Last July, Surgeon General Vivek Murthy issued an advisory that called for a “whole-of-society” effort to combat the “urgent threat to public health” posed by “health misinformation.” Today Murthy asked tech companies to do their part by turning over data on “COVID-19 misinformation,” including its sources and its propagation through search engines, social media platforms, instant messaging services, and e-commerce sites.

While Murthy himself has no power to compel disclosure of that information, the companies have strong incentives to cooperate, since the Biden administration can make life difficult for them by filing lawsuits, writing regulations, and supporting new legislation. President Joe Biden has endorsed the campaign to suppress “misinformation,” going so far as to accuse social media platforms of “killing people” by allowing the spread of anti-vaccine messages. Murthy’s advisory, which defines misinformation to include statements that he deems “misleading” even when they are arguably or verifiably true, says the battle against it might include “appropriate legal and regulatory measures.”

All of this is more than a little creepy in a country where people have a constitutional right to express their opinions, even when they are outlandish and ill-founded. It is especially chilling given the administration’s highly elastic definition of misinformation, which includes criticism of controversial pronouncements by agencies such as the Centers for Disease Control and Prevention (CDC). The CDC itself has a long track record of misrepresenting scientific evidence and misleading the public.

“Defining ‘misinformation’ is a challenging task, and any definition has limitations,” Murthy concedes in his advisory. “One key issue is whether there can be an objective benchmark for whether something qualifies as misinformation. Some researchers argue that for something to be considered misinformation, it has to go against ‘scientific consensus.’ Others consider misinformation to be information that is contrary to the ‘best available evidence.’ Both approaches recognize that what counts as misinformation can change over time with new evidence and scientific consensus. This Advisory prefers the ‘best available evidence’ benchmark since claims can be highly misleading and harmful even if the science on an issue isn’t yet settled.”

If you say something that goes against the “best available evidence” as determined by government officials, in other words, you are spreading “misinformation,” which poses such a grave threat that all rational Americans should be united in opposing it. What does that mean in practice?

Murthy’s office says “misinformation has caused confusion and led people to decline COVID-19 vaccines, reject public health measures such as masking and physical distancing, and use unproven treatments.” It therefore includes skepticism about the value of general masking and criticism of the CDC’s recently reversed recommendation that children as young as 2 be forced to wear masks in schools and day care centers, regardless of local COVID-19 trends.

Remember that “what counts as misinformation can change over time.” So if you questioned the evidence in favor of general masking during the first few months of the pandemic, that was not misinformation, because it was consistent with the CDC’s position at the time. It was also consistent with advice from Murthy’s predecessor as surgeon general, Jerome Adams, who in February 2020 declared that masks “are NOT effective in preventing [the] general public from catching” COVID-19. But after the CDC began recommending general masking on April 4, 2020, saying anything like that suddenly became misinformation.

That September, then–CDC Director Robert Redfield  declared, surely based on the “best available evidence,” that face masks were “the most important, powerful public health tool we have.” He averred that masks were more effective as a safeguard against COVID-19 than vaccines would prove to be. If you doubted Redfield’s claims, according to Murthy, you were aggravating an “urgent threat to public health.”

Last fall, Redfield’s successor, Rochelle Walensky, said wearing a mask “reduc[es] your chance of infection by more than 80 percent.” Although the CDC was unable to back up that startling claim, Walensky insisted “the evidence is clear.” So if you thought otherwise and said so, you were part of the problem that Murthy is determined to tackle.

Last August, in a move that was consistent with Murthy’s demands, YouTube suspended Sen. Rand Paul (R–Ky.) for propagating COVID-19 misinformation by saying “most of the masks that you can get over the counter” have “no value.” While N95 respirators are effective at curtailing virus transmission, Paul said, commonly used cloth masks are not. Five months later, the CDC largely agreed with Paul, saying “properly fitted respirators provide the highest level of protection,” while “loosely woven cloth products provide the least protection.” By Murthy’s reckoning, the CDC’s blessing transformed misinformation into scientifically valid advice.

Last month, the CDC nevertheless claimed a study had shown that wearing a cloth mask “lowered the odds of testing positive” by 56 percent. As the agency acknowledged in a tiny footnote, that result was not statistically significant. And while the associations between infection risk and reported use of surgical masks or N95s were statistically significant, serious methodological problems made the CDC’s causal conclusions highly dubious. But if you noted those weaknesses, you were contradicting the CDC, which by Murthy’s lights made you a public enemy.

For more than a year, Walensky publicly insisted that the scientific case for school mask mandates was ironclad, even after critics repeatedly pointed out the limitations of the studies she was citing. Privately, she conceded that the studies “all have limitations…because we are not randomizing schools.” In other words, the failure to control for potentially important confounding variables such as vaccination rates and other COVID-19 safeguards made it impossible to draw firm conclusions about the effectiveness of school mask mandates. But since the CDC’s public stance was ostensibly based on the “best available evidence,” making that point was “misleading,” according to Murthy’s definition.

Likewise the argument that “universal masking” in K–12 schools was difficult to justify in light of the tiny risks that children face from COVID-19. Yet when the CDC stopped recommending that policy last week, it emphasized the same point. Once again, the skepticism that might have been cause for warning labels, blocking, or suspension on social media platforms taking their cues from Murthy suddenly became the “scientific consensus.”

When it comes to vaccination, the CDC rightly rebuts patently absurd claims about microchips, sterility, and genetic modification. But the “myths” it identifies also include the belief that “the natural immunity I get from being sick with COVID-19 is better than the immunity I get from COVID-19 vaccination.” That is not true, the CDC says, because “getting a COVID-19 vaccination is a safer and more dependable way to build immunity to COVID-19 than getting sick with COVID-19.”

While that’s a sensible position, there still should be room for debate about how the protection offered by natural immunity compares to the protection offered by vaccination. According to a January 28 report in the CDC’s Morbidity and Mortality Report, for example, natural immunity reduced the risk of infection by the delta variant much more than vaccination did among patients in New York and California.

Such findings are obviously relevant to questions such as whether people who have recovered from COVID-19 should be exempt from vaccine mandates or whether they should be treated the same as vaccinated people in settings where proof of vaccination is required. But I am pretty sure that Murthy would view any discussion of natural immunity’s advantages over vaccination as unhelpful and therefore “misleading.” Remember that “claims can be highly misleading and harmful even if the science on an issue isn’t yet settled.”

While lockdowns are thankfully behind us, the debate about them presumably also would have triggered Murthy’s concerns. Stay-at-home orders and mass business closures were, after all, aimed at enforcing “social distancing,” and Murthy says questioning the importance of that precaution is a kind of misinformation. If you expressed skepticism about the empirical basis for such edicts, which were often arbitrary and medically dubious, you could easily have been found guilty of contradicting the “scientific consensus” based on the “best available evidence” at the time.

The notion that dissent from the official line on public health issues should be treated as an “urgent threat” to be addressed by a “whole-of-society” crusade, possibly including “legal and regulatory measures,” is fundamentally illiberal and inconsistent with freedom of speech. White House Press Secretary Jen Psaki describes the administration’s demands for suppression of “misinformation” as “asks.” But that characterization is risible given the power that the executive branch wields over the companies whose “cooperation” it is seeking. Censorship by proxy is still censorship.

The post Vivek Murthy's Demand for Data on COVID 'Misinformation' Is Part of a Creepy Crusade to Suppress Dissent appeared first on Reason.com.