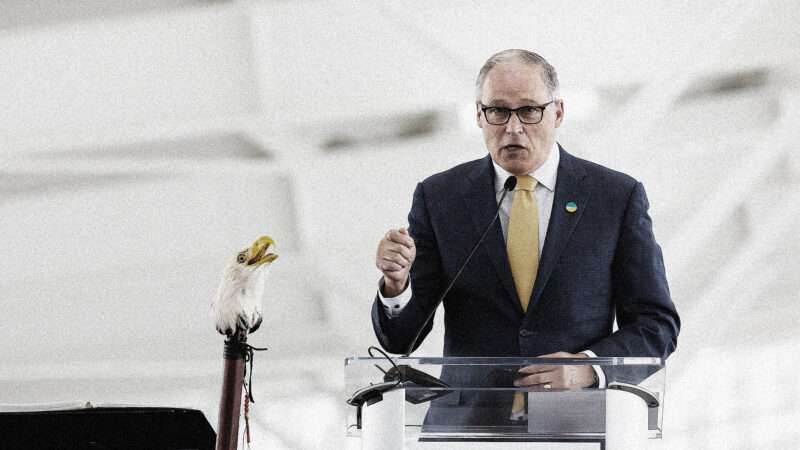 Probably no other governor in the country has summed up the mentality of public health officials during the COVID-19 pandemic more succinctly than Washington State’s Gov. Jay Inslee.

Even if you ignore the casual dismissal of the human agency possessed by the 7.6 million people residing in his state, Inslee’s only-I-can-save-you approach to the pandemic doesn’t make a lot of sense. Imagine hearing a governor announce that he alone was solely responsible for preventing traffic fatalities or drownings. It was 18 months after the pandemic hit, but in that same October interview, Inslee pushed back against the idea that there should be some timetable for rescinding the emergency powers he’d seized at the outset—powers that he’d used to shut down some businesses as well as “ban crowds, shut down schools, require vaccinations for some employment, and require masks to be worn,” according to The Seattle Times.

Inslee’s emergency declaration is now more than two years old. This month, the state legislature in Washington had an opportunity to put an end to them. Instead, lawmakers shrugged.

The state House declined to vote on an emergency powers bill, Senate Bill 5909, before the March 4 cutoff that limits what legislation can be passed during the current legislative session. The bill would have limited emergency orders to no more than 90 days, but some supporters of the efforts were trying to amend that down to 60 days or 30 days—similar to reforms that have passed in several other states.

“We need to be able to have a say in what happens in the state,” Rep. Mike Steele (R–Chelan) told 560 KPQ News Radio.

Not enough of his colleagues agreed, despite Inslee’s aggressive use of Washington State’s emergency powers law, which is one of the broadest such statutes in the country. It gives the governor authority over “such other activities as he or she reasonably believes should be prohibited to help preserve and maintain life, health, property, or the public peace,” with few limitations and no expiration date.

What could go wrong?

As I wrote in the February issue of Reason, broad and ill-defined emergency powers laws exist in most states but until the COVID-19 pandemic, they were mostly used for acute emergencies like severe storms, earthquakes, bridge collapses, terrorist attacks, and the like. Those are emergencies in the true sense of the term: limited events for which it makes sense to short-circuit the usual governing process so an immediate response can be directed by the chief executive.

A two-year-long pandemic is not really an emergency, even if it remains a vitally important policy issue. This sort of open-ended crisis that leaves the legislature out of the equation breaks the feedback loop that representative democracy relies upon. It also ignores the role that individual decision-making plays in mitigating the effects of a deadly disease, presuming that people would be utterly helpless without the government to protect them. No matter what Inslee might think, he was not solely responsible for the outcome of the pandemic in his state—nor would he want to be held singularly responsible for the more than 12,000 COVID deaths that occurred there, I’m sure.

Washington State lawmakers might have punted on the opportunity to rein in their governor, but there are similar efforts underway in a few other places.

In Idaho, where the state’s emergency law allows governors to, among other things, “regulate the free movement of constituents,” some state lawmakers are trying to finally put an end to Gov. Brad Little’s two-year-old emergency declaration, according to the Idaho Capital Sun.

In Minnesota, where Democratic Gov. Tim Walz kept the state on an emergency footing for 474 days, lawmakers are pushing a bill to cap such declarations at 30 days, Minnesota Public Radio reports.

And in Wisconsin, the state Assembly has passed a bill forbidding governors from closing supposedly “nonessential” businesses as part of a declared emergency, as happened there and in other states at the outset of the pandemic.

That’s on top of reforms passed last year in places including Kentucky, New York, Ohio, and Pennsylvania—which remains the only state where voters have weighed in on whether to limit gubernatorial emergency powers.

“Having monitored the emergency powers debate across the country for the last few years, I remain dumbfounded why Washington’s legislative majority is content to cede its constitutional role to debate and enact policy to the governor,” writes Jason Mercier, director of the center for government reform at the Washington Policy Center, a free market think tank. “The governor should not fear being required to make the case to lawmakers why a particular emergency restriction is appropriate to continue, and the legislature should not hide from its constitutional responsibility to debate and adopt policy.”