More than five years ago, Volkswagen showed off its vision for its next-generation of vehicles — a cheerful two-tone lime yellow and white microbus concept that gave a nod to its T1 van life past and embraced an electric and connected future.

That electric microbus future has finally arrived. At least, for Europe.

Volkswagen introduced Wednesday two versions of an electric microbus — the ID. Buzz and ID. Buzz Cargo — that will go on sale in Europe in the third quarter of this year as part of the automaker’s plan to sell more than 1 million EVs annually by 2025. Notably absent was pricing and the estimated range of the microbus.

U.S. consumers keen to buy the EV will have to wait another year or more. A long-wheelbase passenger model will debut for the North America market in 2023 and go on sale in 2024, according to the German automaker.

Just like the concept, the production version of the ID. Buzz and its cargo cousin are based on the automaker’s modular electric drive kit, or MEB. The MEB is a flexible modular system — really a matrix of common parts — that VW Group brands including Audi, Seat, Skoda and Volkswagen use to improve the efficiency and cost-effectiveness of producing electric vehicles.

About 30% of all electric vehicles in the VW Group are already based on the MEB, including the Volkswagen ID.3, an electric hatchback that is only sold in Europe and the Volkswagen ID. 4 SUV, and ID. 5 along with various variants of the Audi Q4 e-tron. By 2025, the automaker expects more than 80%.

There are, of course, critical differences between the conceptual microbus revealed back in January 2017 and the production versions that will be available to consumers. For instance, the ID. Buzz will not have an “autonomous mode,” in which the steering wheel retracts and merges into the instrument panel and then wisks its passengers to their destination.

The ID. Buzz and its cargo counterpart will be produced at Volkswagen Commercial Vehicles’ main factory in Hannover, where the company plans to shift its battery pack assembly for the vans. The automaker is investing about 100 million euros to construct a battery system assembly at that factory. 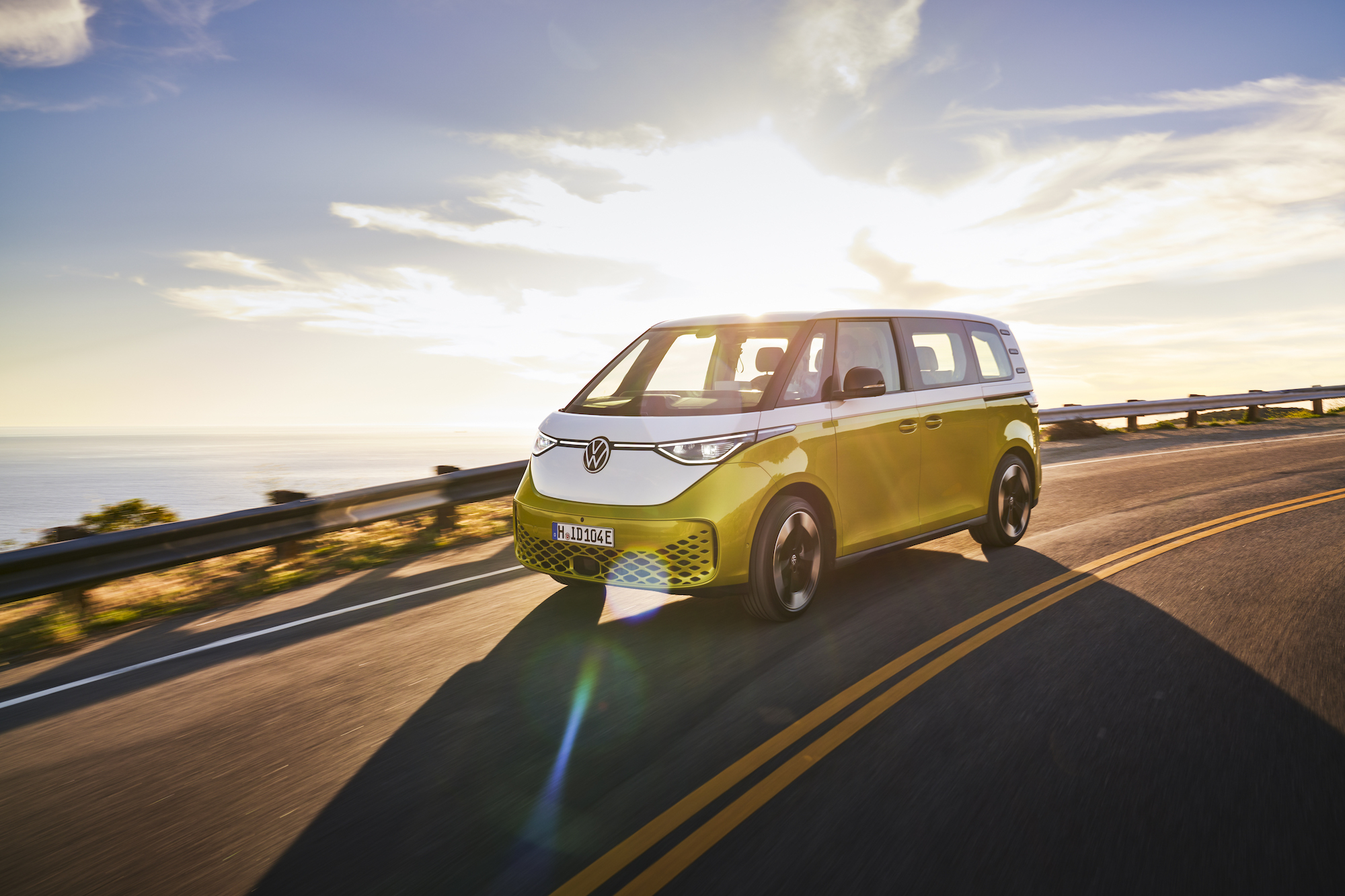 The exterior, including the two-tone paint are largely unchanged from the concept, which really pulls from the original T1 microbus that first debuted in 1950. The ID. Buzz will be offered in 11 colors, including seven single colors such as white, silver, lime yellow, blue, orange, green and black. There will be four two-tone options, always with white tops and either lime yellow, blue, green or orange.

Volkswagen will eventually offer consumers a variety of battery and wheelbase configurations. For now, the first European versions of the two microbus vehicles will come equipped with a 82 kWh battery pack mounted in the floor and a single motor on the rear axle that will produce 201 horsepower and 229-pound feet of torque. The top speed will be electronically limited to 90 miles per hour. 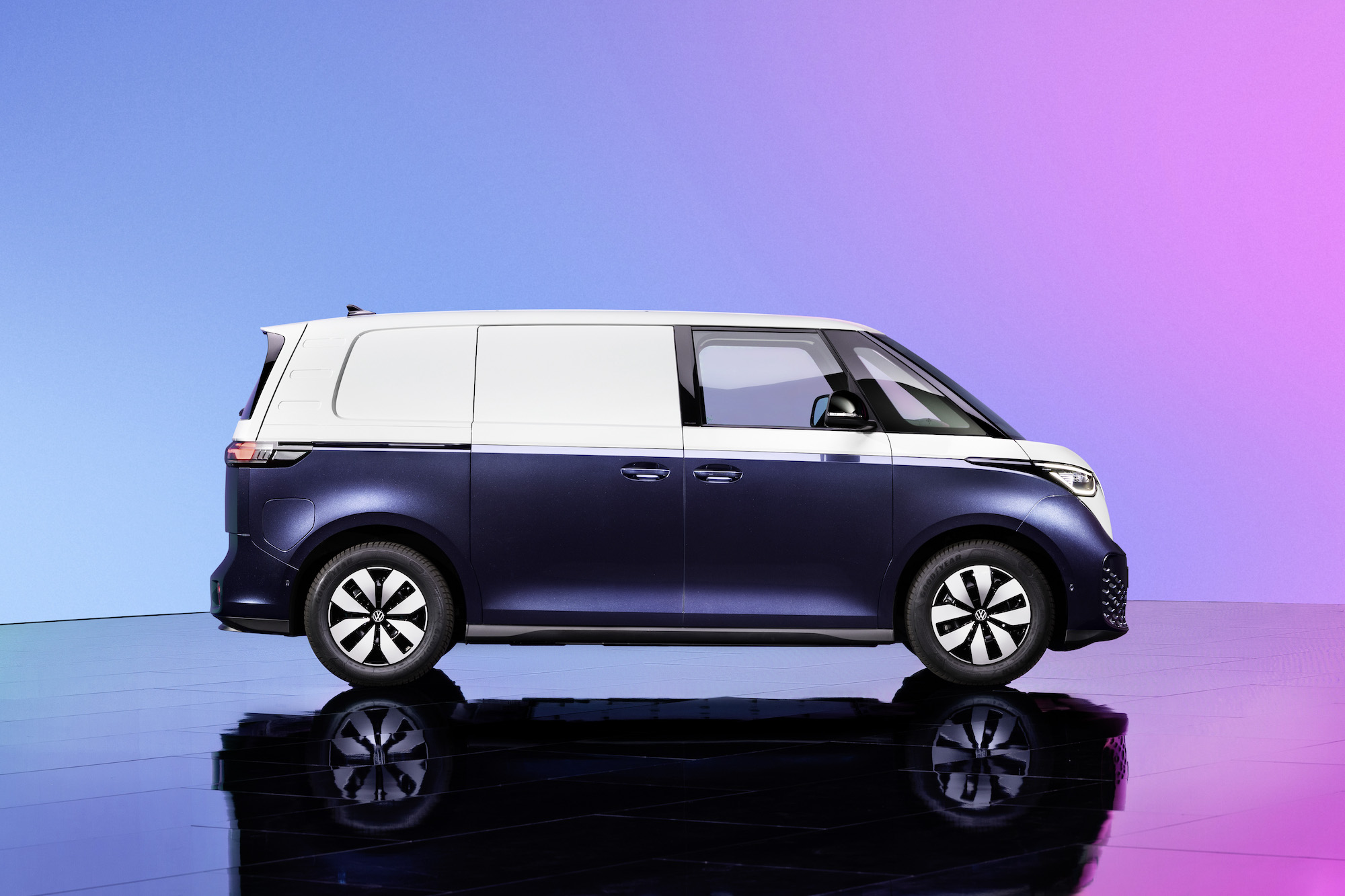 Both European ID. Buzz versions will come with 18-inch steel wheels and a standard wheelbase of 117.6 inches and total length of 185.5 inches long and 78.1 inches wide. This puts the ID. Buzz close, but not exactly the same, to the wheelbase and length of the VW Eurovans (Westies) that stopped being produced after 2003.

The ID. Buzz will have a CCS plug connector and the capability of charging the battery from 5% to 80% in 30 minutes when using a DC fast-charger. The ID. Buzz model line won’t come to market with the ability to “plug and charge,” a software feature that allows the driver to pull up to public charger and start charging without the hassle of using a credit card or membership card. The company said that will become available via a software update in the future.

In Europe, the ID. Buzz and its cargo variant will be capable of bi-directional charging, which will allow the vehicle to push power from its battery into a home. The company said that in the future this can be used for stabilizing the grid, although it should be noted that the company didn’t provide a timeline. The power transfer and communication will take place via an optional DC bi-directional wall box.

Inside the ID. Buzz 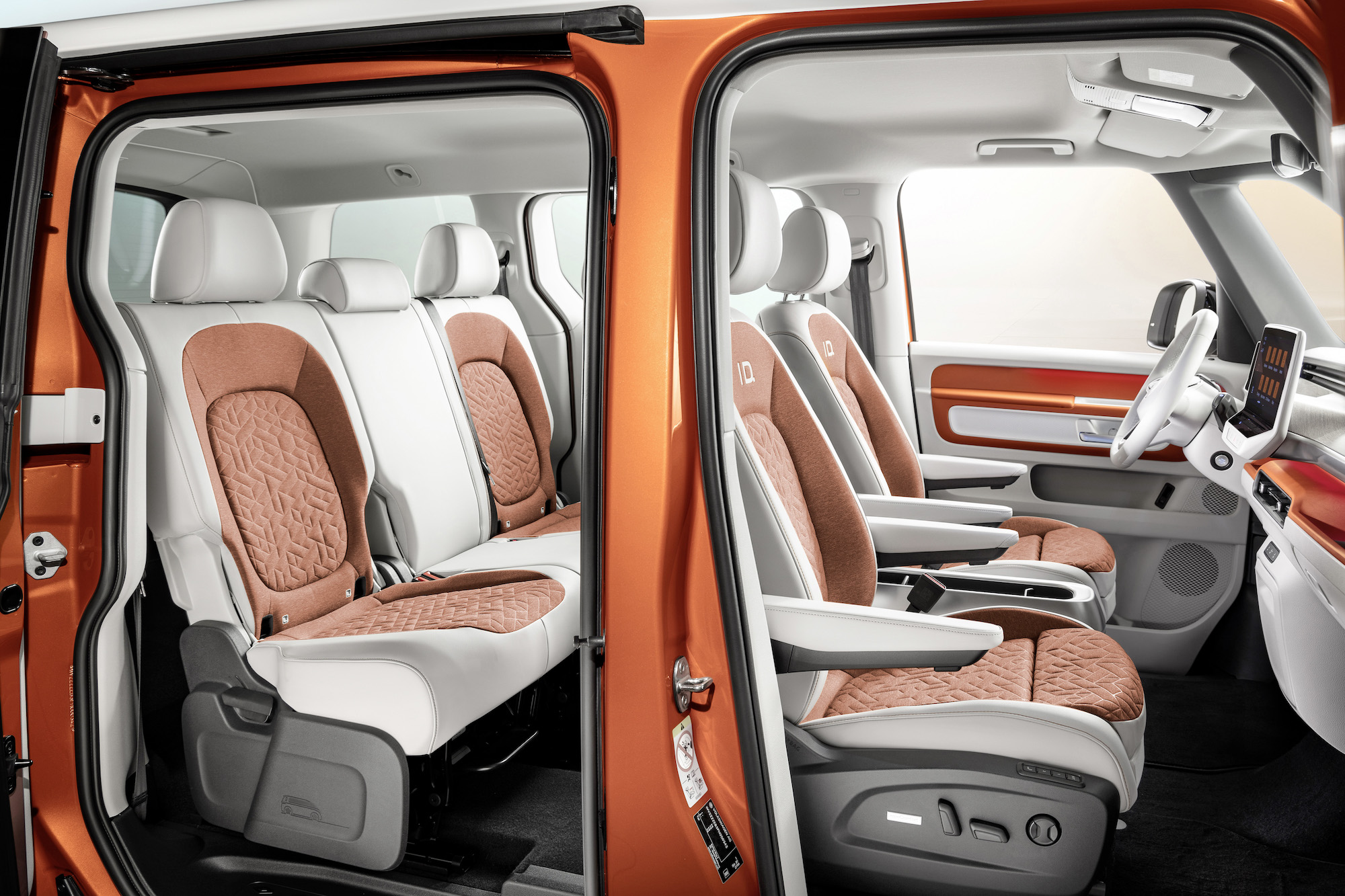 The passenger version of the ID. Buzz will debut with five seats and depending on the trim level may or may not have electric seat controls. The top trims will come with all the modern comforts including electrically adjustable controls, a memory feature and even a massage function. A six-seat, three-row configuration will come later.

In the back, there is a three-person bench, which can be folded down completely or split 40:60. There are also fold-down tables located in the backs of the front seats, in another nod to VW’s microbus past. Perhaps, one of the niftier details is the option of adjusting the height of the trunk floor. In all, there will be about 39.6 cubic feet of luggage space.

The cargo version will be designed to do what its name implies, haul packages. Behind the front seats is a fixed partition that can be configured to include a window and an opening for loading items. The cargo space is 137.7 cubic feet and has enough room two hold two euro-standard pallets.

There will be other ways to configure the ID. Buzz on the fly, such as a movable and removable center console. The upper section of the console has storage bins, a 1.5 quart flip-lid compartment designed to hold a water bottle, and
1.3 gallon drawer that can hold tablets or laptops. 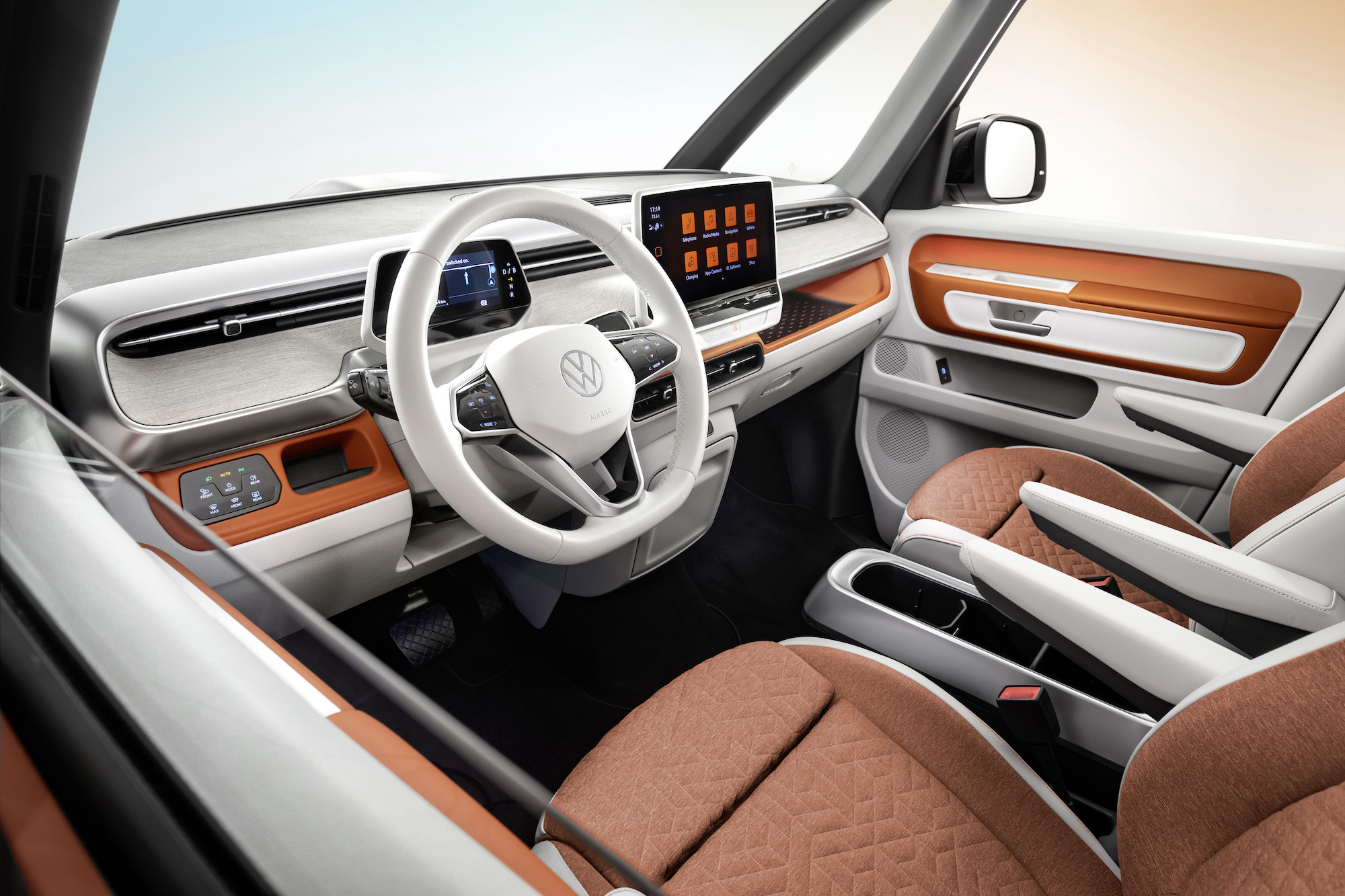 The ID. Buzz also comes with what is now expected technology, including a standard 10-inch digital display tucked behind the steering wheel and a more centrally located 10-inch display for the infotainment system. A 12-inch display with navigation is optional.

Underneath that central display, users will find a control bar with digital buttons and touch sliders. The touch sliders are used to regulate temperature and volume; the buttons access menus for the climate, driver assist, driver profiles and the parking functions.

Moving to the steering wheel, drivers will find a stalk that shifts the vehicle into neutral, drive or reverse. To the left of the steering wheel, there are digital controls for activating the lights, heating and defrost for the windshield and rear window. To the right are two USB-C plugs and a tray for wireless charging, which is also standard. Because you can never be too connected, there are two console there are two more USB-C plugs in the center console.

Perhaps one of the more interesting elements is how VW is leveraging internet connectivity and lighting. The company said in its global debut Wednesday that the VW ID. Buzz vehicles will be able to communicate with traffic infrastructure and will be able to receive and send important information using a dedicated communication standard that is independent of cellular network.

The ID. Buzz has followed in the tire tread of other ID vehicles in the line up and goes big on the ambient lighting. It comes standard with 10-color lighting, although there is an option to boost that to 30. The lighting is designed to be interactive and users can set the mood by picking different colors or even combinations.

The lighting also gives the driver information, including lighting up red to signal danger and the need to brake.

Other tech includes an advanced driver assistance system. No word yet on what the U.S. bus will have, but the European version will come standard with features that will assist in keeping the vehicle in the lane and display road signs in the instrument cluster. Optional systems will include cruise control that automatically keep it distanced from other vehicles and a parking assistant, among other options. One optional feature called travel assist uses swarm data to enhance road safety with driving information gathered from other vehicles that have used the road before. The idea is that it can help keep the vehicle in the lane on roads with no lane markings, according to the company.