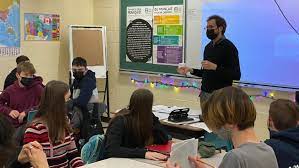 New Brunswick’s French immersion program, currently serving fewer than half of the province’s Anglophone students, is under review once again.  The latest report, produced by John McLaughlin and Yvette Flinn, in tandem, and released February 2, 2022, proposes that it be replaced by an upgraded core French language program offered to all students. It has, predictably, exposed the language fault line never far below the surface in Canada’s only officially bilingual province.

Judging from the initial reaction, bridging the “two solitudes” through early language immersion in schools is still a dream beyond reach. Ongoing debate over bilingualism, especially in schools, consumes a lot of time and energy, for one good reason – it’s fundamental to the unique regional character of the province. Strangely enough, finding common ground is made doubly difficult by the provincial administrative structure itself, maintaining linguistic separation in the provision of services.

After three policy pivots on different entry points for French Immersion since former Premier Shawn Graham’s 2008 overhaul of the program, a “two-tiered system” continues to adversely affect the majority of Anglophone students. Most New Brunswickers would agree with McLaughlin’s recent pronouncement: “It is time for this exhausting and unconstructive cycle to end.”  Whether dismantling French Immersion is the answer is very much in question.

Watching the debate rear its head again, the searing insights of Hugh MacLennan’s 1945 classic, Two Solitudes, came to mind. While written about Quebec and mostly during the height Second World War conscription crisis, that novel put a finger on the psychological and cultural separation between Anglophone and Francophone which, in some ways, haunts us still.  “Two old races and religions meet here and live their separate legends, side by side,” MacLennan wrote, referring to Anglo Montreal and rural French-speaking countryside villages. “If this sprawling continent has a heart, here it is. Its pulse throbs out along the rivers and railroads; slow, reluctant and rarely simple, a double beat, a self-moved reciprocation.”

Government reports never rise to such poetic elegance, especially in a more straight-forward and less florid provincial culture. That’s a shame because culture and language inspire passion and ingenuity as well as laying bare underlying divisions. Reconciling those linguistic tensions is, after all, what makes both Quebec and New Brunswick unique or, put another way, ‘not provinces like the others.’

Contemporary New Brunswick, in spite of a succession of policies fostering bilingualism, remains, in the words of the report, “a bilingual province in name only.” Only 33.9 per cent of New Brunswickers considered themselves bilingual, according to the 2016 Canadian Census. While 73.2 per cent of francophones reported that they spoke both languages, that was the case for only 15.7 per cent of anglophones. That’s not a ringing endorsement of provincial core language programs in K-12 schools.

With a little imagination, we can still see fleeting glimpses of Hugh MacLennan’s Protestant Anglo Montreal in the provincial capital of Fredericton and of the French-Canadian village of Saint Marc-des-Erables in Madawaska. Industrializing villages and towns may not spark the resistance found in the classic novel, but it’s not far fetched to spot contemporary examples of fictional characters like Ontario businessman Huntley McQueen and the odd Paul Tallard, at home in both languages, but trying to reconcile the tensions between French Canadian and English identities.

Over the past two years, the Blaine Higgs government’s proposal to change the French Immersion program in the province has sparked robust debate in both languages.  Blunt statements by People’s Alliance leader Kris Austin that French Immersion was a “failed program” were met with stony silence from Education Minister Dominic Cardy on Global News.

Simply touching French Immersion was enough to send its passionate advocates in the local branch of Canadian Parents for French (CPF NB) into panic mode. Introducing pilot programs in more than a dozen school drawing upon “best, evidence-based practice” in providing enhanced core French suggested that under Minister Cardy the ‘fix was in’ on the likely alternative. That explains why Green Party leader David Coon recently provided a stout defense of French Immersion programs.

Coming on the heels of a provincial review of the Official Languages Act, required every 10-years, the McLaughlin-Flinn report dovetails with proposed plans to create a government department dedicated to advancing the two official languages. It did lift the veil on the stubborn “challenges,” including “confusion over what it means to be bilingual,” the net effect of “intergenerational linguistic tensions,” and how better performing students are siphoned away from mainstream Anglophone schools.

Government reports don’t make a dent when it comes to rectifying entrenched problems. Back in January 2020, Minister Cardy flagged them on CTV Atlantic. A large number of New Brunswick Anglophones lacked access to French Immersion and there was a shortage of French language teachers. “We’ve got a problem with geography,” he said, in that “you’re more likely to access French Immersion in the cities than the countryside [and] we’ve got a problem with teaching capacity.” It’s going to take some time to successfully address such obstacles.

Everyone agrees that French Immersion fades as a favoured option in high school, reflected in sharply reduced graduation numbers. Shrinking numbers in Grades 11 and 12 are a problem that needs to be addressed, according to Dorothy White of CPF New Brunswick.

Developing student fluency in two or more languages is possible, as demonstrated in Quebec and many European nations.  There’s a rather draconian element of compulsion in Quebec where French is the official language buttressed by language laws limiting the use of English in the public sector. In the case of Europe, students are more immersed in a multi-language universe where they can easily travel to visit places nearby where different languages are spoken in the streets.

One constructive proposal in the latest report is to embrace the Common European Framework of Reference for Languages, to assess and identify students’ levels of proficiency. Establishing six evidence-based levels of language fluency would help, but the greatest advantage may lie in acquiring teaching resources geared to seeing more students master conversational French and far more at level C2, approaching native fluency.

Former Deputy Minister of Education John McLaughlin, the report’s co-author, is right in recommending a gradual approach to advancing French instruction so as the minimize the potential backlash.  “Set the table properly, get people on board and then create a movement that nobody will want to stop” sounds like it was ripped out of a superintendent’s playbook for school change.

Passion and poetry are more likely to inspire such a movement. At the risk of sounding passionate about promoting French in an Anglophone world, might I suggest going back to the original conception of “two solitudes,” coined by Rainer Maria Rilke and popularized in MacLennan’s novel?  “Love consists in this, that two solitudes protect and touch and greet each other.” Simply put, crossing over and marrying someone from the other side does wonders for bilingualism. Look around and you will see examples of this generational solution.

*Reprinted from The Telegraph-Journal, February 11, 2022.

What can be done to advance bilingualism in Canada’s only officially bilingual province?  Is French Immersion still central to that overarching goal?  What’s standing in the way of graduating more students fluent in French in New Brunswick?  Is it better to improve French Immersion or to greatly enhance core French programs in all Anglophone schools?

One thought on “Bridging the Two Solitudes: Is French Immersion still the Best Route in Canada’s Only Bilingual Province? *”