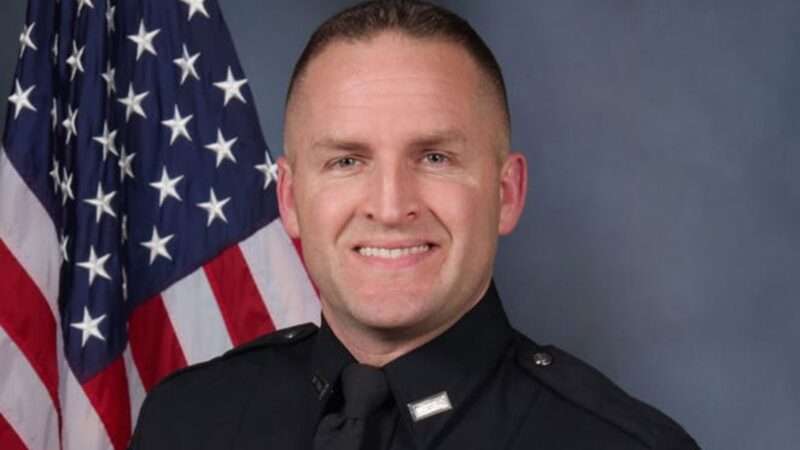 On the night that Louisville police killed Breonna Taylor, Detective Brett Hankison fired 10 rounds into the side of her apartment, shooting through a glass patio door and a bedroom window that were both covered by blinds. He did this while two of his colleagues, Detective Myles Cosgrove and Sgt. Jonathan Mattingly, were inside the apartment, firing 22 rounds down a dark hallway in response to a single round that Taylor’s boyfriend, Kenneth Walker, had fired at the intruders, whom he mistook for violent criminals. Three of Hankison’s bullets penetrated the wall separating Taylor’s apartment from the neighboring unit, terrifying the people who lived there.

These facts alone are enough to show that Hankison acted recklessly, without regard to the risk that his panicked, indiscriminate response to the gunfire would injure or kill his fellow officers, Taylor, or her neighbors. Yet after deliberating for just three hours yesterday, a jury unanimously decided that Hankison was not guilty of wanton endangerment. That decision vividly illustrates how difficult it is to hold police officers accountable for using excessive force even in the rare cases where they face criminal charges. Despite some recent exceptions, jurors tend to give cops a pass even when their actions are patently outrageous, granting them absolution for conduct that would send ordinary citizens to prison.

Hankison faced three charges of wanton endangerment, one for each of the people in the apartment next to Taylor’s: Cody Etherton, Chelsey Napper (who was pregnant at the time), and her 5-year-old son. The charges, which are punishable by up to five years in prison for each count, alleged that Hankison “wantonly engage[d] in conduct which create[d] a substantial danger of death or serious physical injury to another person” in circumstances that indicated an “extreme indifference to the value of human life.”

That language jibes with the conclusions that Louisville’s interim police chief, Robert Schroeder, reached when he fired Hankison in June 2020, three months after the raid that killed Taylor, an unarmed 26-year-old EMT who died in the hail of bullets fired by Cosgrove and Mattingly. “Your actions displayed an extreme indifference to the value of human life when you wantonly and blindly fired ten (10) rounds into the apartment,” Schroeder wrote in his termination letter to Hankison. “These rounds created a substantial danger of death and serious injury to Breonna Taylor and the three occupants of the apartment next to Ms. Taylor’s…I find your conduct a shock to the conscience. I am alarmed and stunned you used deadly force in this fashion.”

The grand jurors who approved the charges against Hankison that September were similarly shocked, alarmed, and stunned by his conduct. Kentucky Attorney General Daniel Cameron, although he concluded that Cosgrove and Mattingly had acted in self-defense, likewise did not think Hankison’s use of deadly force was justified. But the jurors who acquitted him evidently disagreed. The question is why.

Hankison testified that he was initially positioned behind Cosgrove and Mattingly as they broke into Taylor’s apartment around 12:40 a.m. to serve a search warrant aimed at discovering evidence of her former boyfriend’s drug dealing. Hankison said he saw Mattingly go down after he was struck in the leg by Walker’s bullet. The muzzle flash briefly illuminated the apartment, and Mattingly told investigators he saw “a figure in a shooting stance” holding a rifle, possibly an AR-15. Although Walker’s gun was actually a 9mm pistol, Hankison testified that it sounded to him like an AR-15. “The percussion from that muzzle flash I could feel,” he said.

Hankison said he wanted “to get out of that fatal funnel” at the entrance to the apartment “as quickly as possible and get to a location where I can return rounds.” He retreated to the side of the apartment, where he saw more muzzle flashes through the patio door and the bedroom window. “I knew Sgt. Mattingly was down, and I knew they were trying to get to him, and it appeared to me they were being executed with this rifle,” Hankison said. “I thought I could put rounds through that bedroom window and stop the threat.”

The muzzle flashes that Hankison saw came not from the imaginary rifle but from his colleagues’ .40-caliber pistols. It bears emphasizing that the door and window were both obscured by blinds, so Hankison could not see anything aside from the muzzle flashes. He nevertheless deemed it prudent to fire 10 rounds blindly through the door and window, in the hope that some of them might by happenstance strike the “figure in a shooting stance” he had glimpsed as he stood near the front doorway. Prosecutor Barbara Maines Whaley, an assistant Kentucky attorney general, noted that Hankison “shot into the side of that building in the opposite direction from those who were in the line of fire coming out of the apartment.”

“Weren’t you concerned if you fired through the sliding door you might hit your fellow officers?” Whaley asked Hankison. “Absolutely not,” he replied.

“Did you feel guilty about leaving your fellow officers in the fatal funnel?” Whaley asked. “No,” Hankison replied.

Hankison was equally confident when he was asked if he thought, in hindsight, that he did anything wrong during the raid. “Absolutely not,” he said, although he added that Taylor “didn’t need to die that night.”

That much is certainly true. But while Hankison’s lawyer, Stew Mathews, sought to cast blame on Walker, who exercised his Second Amendment right in response to a middle-of-the-night home invasion, the responsibility for Taylor’s death lies elsewhere.

As always when the war on drugs kills someone, the blame starts with the politicians who authorized violence in response to the consumption of arbitrarily proscribed intoxicants. It extends to Detective Joshua Jaynes, who obtained a no-knock search warrant based on thin evidence and a crucial misrepresentation that led to his dismissal. Yvette Gentry, who succeeded Schroeder as interim police chief, also faulted Jaynes for poor planning, saying “the operations plan was not completed properly” and “there should have been better controls, supervision and scrutiny over this operation prior to the warrant being signed and executed.”

Jefferson County Circuit Judge Mary Shaw, who quickly rubber-stamped Jaynes’ application without questioning its basis, was another crucial link in the chain of failures that led to Taylor’s death. So were the officers who decided that breaking in Taylor’s door in the middle of the night was a prudent way to serve the warrant, despite the potential for deadly confusion. The final link was Cosgrove, who according to the FBI’s analysis fired the bullet that killed Taylor.

In her December 2020 termination letter to Cosgrove, Gentry said he failed to “properly identify a target” when he fired 16 rounds down a dark hallway. “The shots you fired went in three distinctly different directions, demonstrating that you did not identify a specific target,” she wrote. “Rather, you fired in a manner consistent with suppressive fire, which is in direct contradiction to our training, values and policy.” Cosgrove—who, like Hankison, mistook police gunfire (Mattingly’s) for shots fired by Walker—later said he was not even consciously aware that he had used his gun.

Cameron nevertheless decided that Cosgrove and Mattingly had acted appropriately in the circumstances, and grand jurors said charges against them were never even presented as an option. “It’s interesting that the only person charged with wanton endangerment for the same conduct is Brett Hankison,” Mathews observed in his closing.

Taylor’s family probably would choose stronger words to describe the fact that no one has been held criminally liable for her senseless and completely avoidable death. But that failure hardly absolves Hankison, whose behavior is striking even in the context of an operation that was reckless from beginning to end. Hankison, after all, was not under fire. He nevertheless thought it was a good idea to assist his colleagues by shooting his gun in their general direction based on a completely erroneous impression of what was happening inside an apartment whose interior he could not see.

The observation that police work is dangerous, or that Hankison was in a high-stress situation, or that he was concerned about his colleagues’ welfare, cannot possibly justify the decisions he made that night—decisions that he stands by even in retrospect. “It’s a good day, finally, for law enforcement,” Mathews declared after the verdict. On the contrary, it was a bad day for conscientious police officers who recognize the grave danger their power poses when it is abused. And it was a bad day for anyone unfortunate enough to encounter a cop who agrees with Hankison that he did nothing wrong.

The post A Jury Concludes That Blindly Firing 10 Rounds Into Breonna Taylor's Apartment Was Not 'Wanton Endangerment' appeared first on Reason.com.