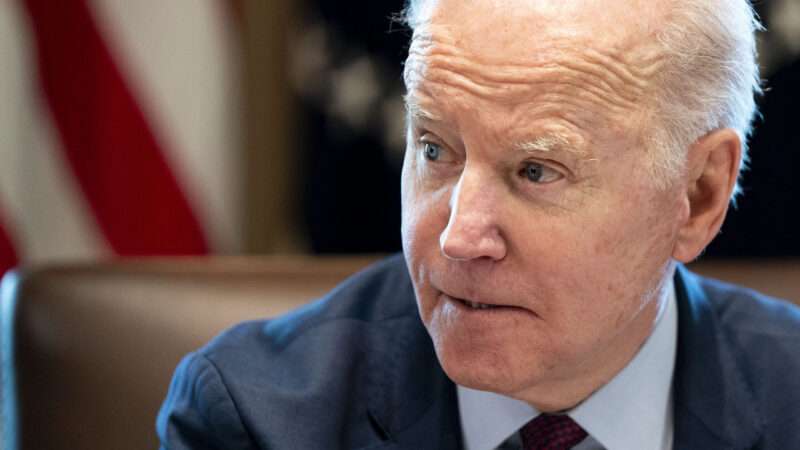 During the State of the Union address, President Joe Biden’s opening comments about Russia’s invasion of Ukraine were pretty good—inspiring even. If he’d stopped there, he might have walked away from the podium on a high note. Unfortunately, the president continued to talk, laying out a litany of intrusive and expensive interventions in American life, many of which represent stalled elements of his legislative agenda. He called for higher taxes, more spending, more regulations, and an end to criminal justice reform efforts when he wasn’t spitting out word salad. It was a lost opportunity for Biden to take what is usually the best course of action for politicians: support freedom and then shut up.

“From President Zelensky to every Ukrainian, their fearlessness, their courage, their determination, literally inspires the world,” Biden noted during his early moments on-stage. “Groups of citizens blocking tanks with their bodies. Everyone from students to retirees to teachers turned soldiers defending their homeland.”

Evocative words they were, living up to CNN anchor Jake Tapper’s assessment that “given his speaking talents and challenges, it was a fairly strong performance.” If only the president had dropped the mic and walked away at that point. But he insisted on reading the rest of his script.

“One of the first things I did as president was fight to pass the American Rescue Plan,” he boasted of the massive spending bill pushed through Congress last year. “Because people were hurting. We needed to act, and we did.”

But, as Reason‘s Peter Suderman pointed out at the time, “only a few percentage points of its massive $1.9 trillion price tag is specifically geared toward, you know, addressing the pandemic.…Most of it is instead a pre-existing Democratic Party wishlist of increased spending on virtually every aspect of government.”

The spending actually hurt more people by devaluing the dollar and driving prices through the roof as part of a pattern, beginning under the previous administration and continuing with Biden, of flooding the economy with money.

“It is hard to ask for a clearer demonstration of fiscal inflation, an immense fiscal helicopter drop, exhibit A for the fiscal theory of the price level,” observed Hoover Institution economist John Cochrane.

Biden did concede that inflation is a problem, but he certainly didn’t admit that the government’s helicopter drop of money and other impositions were the cause. Instead, he saw inflation as a weird side-effect of the pandemic, like the loss of taste and smell. “The pandemic meant that businesses had a hard time hiring enough workers to keep up production in their factories,” he insisted, jumbling cause-and-effect involving mandatory closures of businesses, among other policy disruptions. His solution, predictably, is more government action.

“Tonight, I’m announcing a crackdown on those companies overcharging American businesses and consumers,” he said in a slap at firms understandably raising prices because dollars are now worth less.

“My plan to fight inflation will lower your costs and lower the deficit,” the president asserted. Then he proposed to let the federal government set drug prices, subsidize home-weatherization along with solar and wind power, and underwrite part of the cost of purchasing electric cars as well as build 500,000 charging stations for those vehicles. Biden also wants the government to pay for childcare, subsidize long-term care, and pick up the cost of pre-kindergarten. All of this will come, he promises, without raising taxes on anybody making less than $400,000 per year. That’ll be quite a trick with national debt soaring above $30 trillion without such an ambitious agenda.

Biden also wants more government oversight of nursing homes, a higher minimum wage, and increased government subsidies for college education, among other federal schemes too numerous to mention, most drawn from the stalled Build Back Better monstrosity of a spending bill. None of this sounds like a plan for reducing costs, though it hides some by shifting them to taxpayers. The same can be said of Biden’s vow: “When we use taxpayers’ dollars to rebuild America, we are going to do it by buying American: buy American products, support American jobs.” That’s guaranteed to increase expenses by eliminating consideration of overseas sources and the competition they offer.

“The benefits of Buy America/American policies are likely overstated, and they are, at least partially, responsible for higher infrastructure costs,” found a 2017 report from the American Action Forum.

There is one area of government action that Biden wants to curtail: criminal justice reform. Less than two years after protesters took to the streets against police brutality in demonstrations that sometimes turned violent, the president offers little but a single line about body cameras, banned chokeholds, and restricted no-knock warrants for federal officers. Then matters get worse.

At least the cops will be well-equipped for the next round of protests against police brutality.

The president also called for more firearms restrictions, including on home-built “ghost guns” that were specifically developed to put self-defense beyond the gun-grabbing reach of government. His plan includes banning firearms purchases by people on sketchy watch lists compiled without a modicum of due process.

But it’s hard to know how serious the president is about any issue or if any particular point is especially important to him. His address meandered here and there without any central theme. The speech seemed designed to assure the faithful that he is still committed to pushing stalled legislation, that he remains dedicated to the expanded state favored by Democrats and, most important, that he is still in mentally and physically capable. Some doubts linger on that final point.

“You can’t build a wall high enough to keep out a vaccine” Biden insisted at one point in a verbal fumble over efforts against COVID-19. He also assured the world that “[Vladimir] Putin may circle Kyiv with tanks, but he’ll never gain the hearts and souls of the Iranian people.” Even less likely is Russian dictator Putin to gain the affection of the Ukrainian people.

That opening passage about the war in Ukraine really should have been the sum total of the president’s address. It was a unifying message offered to a deeply divided country before a detour into economic fantasy and disregard for liberty. Encouraging words about underdogs fighting for freedom against authoritarianism should have been left undiluted by ensuing verbiage contradicting that message.

The post Biden Still Wants Government Interfering in All Areas of Life appeared first on Reason.com.