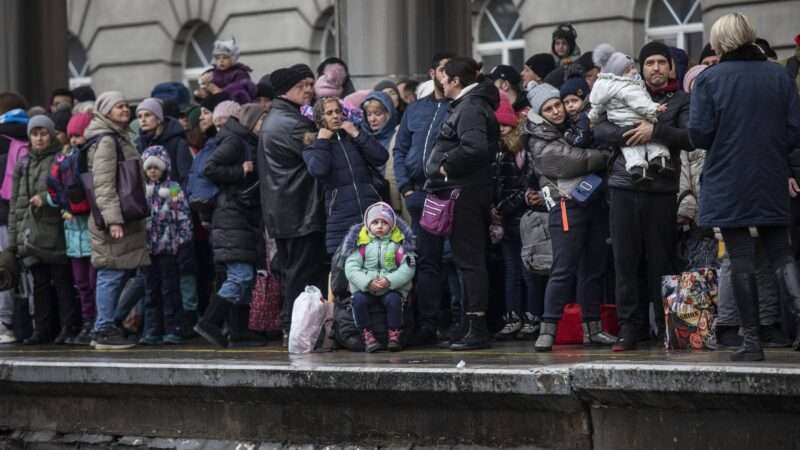 Nikolaus Sires lives in Dnipro, Ukraine. Originally from New Orleans, he bought an apartment in Dnipro, where he lives with his Ukrainian fiancée, four months ago, because he found the people nice and the area peaceful. Then, in the middle of the night on March 3, he woke to news that the nuclear power plant in Zaporizhzhia was under attack.

Sires spoke to Reason‘s Nancy Rommelmann by phone while she was on the ground in Warsaw, Poland, on March 5. She is on her way to Lviv by train at the time of publication. Sires talked about being in Ukraine at the start of the war and what it’s like to wonder if a nuclear power plant within an hour’s drive might be melting down.

What follows is a transcript of his words, edited for length, clarity, and style.

“We wake up and just see people saying, ‘Hey, they’re attacking nuclear power plants.’ That’s what’s on the news at 2:00, 3:00 in the morning. That’s only 80 kilometers away; time to finish packing the bags. We stayed put because we’re under curfew from 8:00 p.m to 6:00 a.m. You can’t on the streets. I mean, they could consider you a saboteur or something and shoot you. We didn’t have the option to leave, so we had to sit there and wait to see what happened.

“At this point we don’t know if a bomb is going to fly this way. And it’s becoming normal. I’m starting to see how Ukrainians get used to eight years of war and act like nothing’s happening. Air raid sirens all day, telephone alerts. ‘Hey alarm, go to the shelter!’ And it’s like, is it real this time? I mean, it’s a nightmare. My fiancée’s in another room trying to relax. Her mother [and daughter] live five kilometers away. Her mother doesn’t want to leave. This is her home. ‘Ukraine’s my home. Why should I leave?’ I mean, until they’re dropping bombs in her neighborhood…maybe she’ll change her mind when it’s too late. That’s how I see it. I keep telling my woman, ‘Hey, you need to talk to your mom and say, “Do you want us all to die? Because you want to stay here?'” Nobody wants to leave mom behind. I understand that. I couldn’t leave my mom behind, but it comes to the point you want to gag them and throw them in a car, to say, ‘You’re going, let’s go.’ The longer we wait, the more problems there are.

“There’s been an eight-year war but [for many Ukrainians] it’s almost like somebody in Montana saying, ‘I don’t see a problem on the Mexican border,’ because they’re not close to it. Maybe there’s a problem in the Donbas region, but if you’re not there, you don’t hear the shelling. You don’t know there’s something going on because you don’t see it so it’s easy to disconnect from it. And I think a lot of Ukrainians that live away from the conflict can easily forget about it because it’s not affecting them directly. There’s this mentality here, that it’ll be fine.

“Right now [in Dnipro] we’re not getting attacked, but that could change at any minute as far as I’m concerned. I try to be optimistic, but I can see what’s going on. It’s not good. When the [first] attack happened on the…was it the 24th in the morning? 25th? We woke up at 7:00 in the morning and found out the airport had been bombed and some other buildings in Dnipro. It’s just like that. You sleep and you wake up, you’re in a war.

“I’m from New Orleans, Louisiana. I almost stayed for Katrina. I had a friend that talked me into leaving. He was like, ‘You’ve got to go. It’s going to be bad.’ Because I’ve experienced hurricanes before, I know it can get bad. Her mother, I think she’s about 65 or so, she probably never…I mean, you’ve had Soviet times, but she has never directly seen a conflict and doesn’t understand that your house could be blown up tomorrow. We’re seeing this stuff happen. Apartment buildings in Kiev and other cities. Rocket hits the building, you’re in there, you’re dead. It’s over with.

“[Ukrainians] are a very strong resilient people and that’s what I admire about them. They’re very good at accepting what cards they’ve been dealt. If you go down to the center of town here, you see thousands of people making Molotov cocktails, donating food and medicine, stuff for troops to eat. They’re making camouflage nets to hide equipment out in the field. Everybody’s doing what they can do. They just pay attention to their surroundings and want to help.

“I don’t know what’s going to happen. Not at all. I mean, just playing an odds game. We hear stories of people getting murdered trying to flee. I think this morning they blew up a rail line near Kiev and Irpin’, so now the train can’t go through there. They’re blowing up bridges in certain places. We’re worried getting on the road and just getting stuck somewhere, to be honest, or getting killed. We know we’re safe here.”

“I still want to go. Yes, definitely. We’ll probably head to Poland. But we’re looking at videos of the train stations here and it’s like, how? My fiancée’s car was in the shop and they were having problems getting parts since this war started. She’s got an old Lada, a little Ukrainian-Russian car that’s really not all that. And we’re worried if the thing’s going to break down on the side of the road. It’s like, you try to formulate a plan, but there’s so many holes in it.

“We just don’t want to wind up in a worse situation. We know we’re good right now where we’re at. We have supplies. Growing up in New Orleans, it’s almost like preparing for a hurricane. We’ve got food. We have means to cook without electricity. We have means for lighting. We have medical supplies. Her mother, it’s a necessity to buy her different medicines for her health, but that’s one of the things we worry about. If we stay, what if we can’t buy her medicine anymore? Then she’s probably going to die anyway. Because that’s where the lines are at right now. There are lines at every drug store and we have trouble finding ibuprofen, basically. What happens when it’s something that we absolutely have to have that we can’t find? It’s my concern. In Ukraine, we don’t have Walmart. You can’t go to one store and buy everything you want. It’s almost like a quest every day. I need to go here for potatoes. I need to go here for medicine. I need to go here for candles. I need to go here for batteries…and right now a lot of the stores are closed. We can’t buy another cell phone right now. I mean, if your phone breaks, you can’t go to the store and buy another one.

“I don’t how to explain it. It’s just…slowly I’m watching the necessities of life disappear because of this war, because obviously the supply lines are interrupted. And we don’t know what’s true. There’s so much propaganda and stories that are on social media. We don’t know if it’s safe to leave. I feel like we could get shot on the road, because I’ve seen videos of people in their car just shot. And you could tell they’re not soldiers, an older couple, a car full of bullet holes. It’s like, I don’t want that to be us.

“And we see it looks like Ukraine is putting up a hell of a fight and because all the aid coming in, as far as weapons and equipment. Russia’s stalled out on the side of the road with no gas for the tanks and troops with no food. And then the nuclear thing. Is Putin going to nuke us just to get rid of Ukrainians? We watched his speech. He wants to get rid of Ukrainians. He doesn’t like them. It’s like the new Jews. It’s scary.

“They told us to start making Molotovs. I have stuff to make Molotov cocktails. I’ve bought fireworks and hair spray so I can make bombs. I’m making bombs in my new apartment. That’s the reality of this.

“I was coming [to Dnipro] because I like it here. I could walk, go to the park. Food’s cheap. The people are nice. These people are not aggressive. And to see this happening, it’s just horrible. They’re in denial that they have a war going for eight years. I’m trying to convince three Ukrainian women it’s time to leave and none of them want to. Like in the morning, my fiancée wants to leave. By the nighttime, ‘I think we should stay.’ That’s my life for two weeks now, ‘Let’s go. Let’s not go.'”