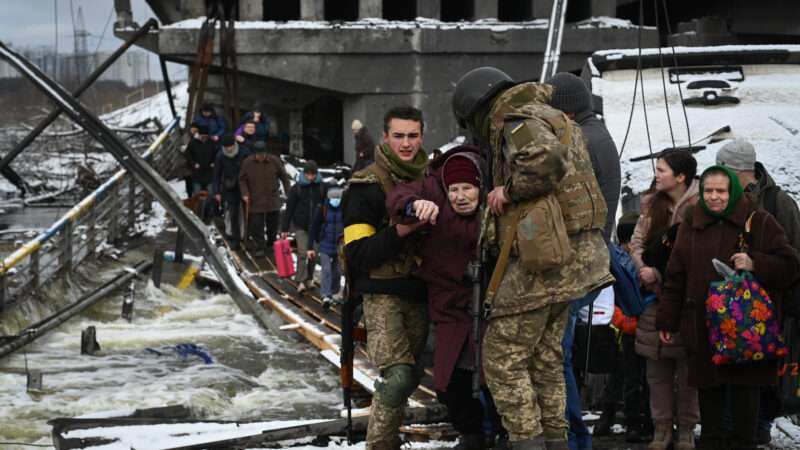 The Hutnyk family has lived in Lviv, Ukraine, for several generations. Volodymyr Hutnyk is the mayor of what his daughter, Oksana, refers to as “the five villages.” Working as a travel agent, Oksana lives with her husband and two young daughters. Her brother, Roman, owns an IT company and lives right next door.

The Hutnyks spoke with Reason‘s Nancy Rommelmann, who is on the ground in Lviv, about how Ukrainians don’t want to abandon their home; they want to stay and fight. The family urges the U.S. to send more support to Ukraine so that “Putin’s influence does not spread across Europe.”

What follows are transcripts from a series of interviews with the Hutnyk family, edited for length, clarity, and style.

“My husband tells me every night to take the children and cross the border; to go to Poland. I don’t want to go. I think everyone should defend their land. This is my motherland, my village, my city. If  I were somewhere abroad and somebody bombed my house, my village, my Ukraine, I would go crazy. It is easier psychologically to be here watching somebody bomb this place than to not be.”

“We are preparing. [The children] are worrying. Our older daughter was going to school every day and helping make military nets, to protect our soldiers. So she feels important. Our younger daughter is worrying but she does not want to go without me. I offered to take them to relatives and leave them for a period of time and come back, but she doesn’t want to stay there without me. My husband thinks that I am too… I don’t know how to say this: not good mother; that I am not worrying about my children. I realize that maybe one moment they will bomb our city maybe, I will have to move away, but not now.

“[My friends] have had different reactions. Some are already in Czech Republic, in Poland. Some of them went to defend Kyiv. I don’t judge. People are not under attack [here] but they try to help. Some people are helping prepare food for refugees coming from the east and from the center. Many of my friends, even though I don’t know if it’s legal, I suppose it is, they look for weapons and for protection from abroad, from Poland and other countries, and they bring weapons to the border and take it across or pay money and send them to Kyiv.

“I didn’t support [Zelenskyy]. He was a good comedian but I couldn’t take him seriously; it was like a joke, come on. But now I admire him. He’s the best president of Ukraine ever. Our whole nation is proud of our president. He is a real patriot; he is very strong. It’s like a Ukrainian joke now: ‘Americans wanted to rescue Zelenskyy from Kyiv, but the plane couldn’t take off because of Zelenskyy’s heavy iron balls.’

“Russians really don’t know what they are doing here. No one knows what Putin is doing here. That is one point. The next is, Russians were stealing money for a long period, telling people they were investing in the military, and they weren’t. They have very old weapons. And Ukrainians now, thanks to the U.S. and Europe, have good weapons. There are many more Russian troops in Ukraine, but I suppose Ukrainians are stronger because of the weapons and the motivation.

“The situation is changing in Russia. They are not worrying about Ukraine, of course, they are worrying about themselves, their money, the rate of the ruble fell and they don’t have cash. Russia is not the U.S., there are many cities and villages where you can’t just use your credit card or your telephone to pay. They have long lines at the banks and they’re promised, ‘Wait two days, we will bring cash for you.’ And in two days they say, ‘Well, it’s been postponed’ and so on. [Russians] hope this is for maybe two weeks, for one month; they will finish the conflict and everything will be okay. But it’s not going to be okay anymore.

“I’m not expecting that people will get rid of Putin. But I hope, and it’s my opinion, that people are very angry. His generals say he is shouting at everyone now. That’s uncharacteristic. He never shouts, he never expresses his aggression, and now he is. Not now, but maybe in two weeks, we will have very angry people on one hand, and a very angry Putin on another hand. And what is between them? Putin is talking all the time now about his red button, to make everyone afraid of him. I think he is angry with Ukrainians, but he is happy to realize the West is afraid of him. I think he treats the situation like he is the highest, like the king of the world because the U.S. and Europe can’t do anything to him, and that’s a problem. It makes him hope that he will destroy everything in Ukraine and he won’t be punished.

“Since February 24th, everything has changed and now [the council] is taking care of refugees. We’ve had 455 refugees here already. We find food for them, a place to stay, and help them to cross the border and go someplace abroad.

“[Putin] is a psychologically ill person and he’s very dangerous and he threatens not only Ukraine but the whole world. He really wants to be the most powerful leader in the world, and he doesn’t want just some part of Europe, he wants to influence even America. He wants to prove that he is the strongest in the world, and that America should be afraid of him.

“Throughout their history, Russians were invaders. They were coming from the East and living at the cost of others. And they don’t know what democracy is. This is like the empire of evil and should be destroyed. Russian people shouldn’t be killed, but their system should be destroyed. If Ukraine with help from the civilized world can’t stop this evil now, it could spread all over the world. At this moment, we don’t need troops from NATO, but we need air support. Give us weapons and make us strong enough to fight against them. We have supplies from abroad at the moment, but we need more.

“Putin has brought so much pain here and nothing good, the Ukrainian population here hates Russians. They know they will destroy everything. People want to live democratic lives, they want to develop themselves, to earn money, have normal jobs, raise normal families. Even Russian-speaking Ukrainians don’t want Russians here.

“Putin is not afraid of the West at all; he thinks you are very powerless and indecisive. That is why he allowed himself and his troops to come into our country. If he was afraid of the U.S., he would have never done this. He can predict that the West will not influence the situation dramatically.

“We thank the U.S. We are happy to have your support on our side. And we thank you for sanctions also, and for weapons. We don’t need somebody to fight for Ukraine, we will do it by ourselves. We are ready to fight, but help us with weapons, we need them today, we need to protect our country.”

“There are thousands of people that they might call and it could potentially be me. But there are so many volunteers, just guys who want to get there. I’m a software developer. I’m the guy who has been pushing the buttons for the last thirteen years. And I have no idea how to shoot, I’m just not reliable. I mean, what’s the value of me being there? It’s better for me to stay here, to volunteer to help in other ways. To keep the economy moving, to keep business running. Our government said to us, ‘Just keep working. Do whatever you do on a daily basis. We need the economy to keep moving’.

“[Americans] definitely need to understand that you cannot trust Russians. I mean, you see that they just bombed houses, attacking civilians. There’s no honor. Every military has a code—things you can do and you can’t do. In true war, military guys are fighting against another military. It’s not that way. They will attack civilians and they will say, ‘See? Ukrainian attacking civilians.’ No. They came with arms to kill us. We just protect our lands and our families. We are not going to Moscow or anywhere trying to attack them.

“The propaganda just destroyed the brains of the Russian population. They think they are cool even though their restrooms are outside of the house for more than 70 percent of the population. But they think they’re a great nation. Come on. Your army, 200,000 troops of such a huge country, cannot do anything, compared to tiny Ukraine. I realized we lost a lot of guys. But I believe the numbers are quite higher on the Russian side. When they see Ukrainians, they just run away. So now we are probably the angriest people in the world for them, which I love. Part of our success is motivation. Russian soldiers have no idea what they are fighting for here. Our guys, they clearly understand what they are fighting for. I’m not really a fighter. But at this point, there is no room for fear. If they come here, you have to stand and you have to protect.

“Some guys of my age left and went to Poland. And now no one respects them. You left us at this moment of time, really? It’s completely fine to send your wife and your kids wherever you want. That’s fine. But this is our land. I was thinking about this because I have clients in the U.S., Austria, and the U.K. And most of them were telling me, ‘My house is open to you, you can come at any moment.’ But so far, we are not willing to use this option. Yeah, I can pack my two kids and wife and go to the U.S.. That’s probably what I would prefer. But I have my sisters here, my parents, then my in-laws and grandma and so on. How could I leave them here?

“What Putin is doing right now is definitely terrible. But long term, he helped our nation to recover, to unite. And I believe after this war, we will become a completely different society. We will become a true European nation with European values and hopefully we will join the E.U. Right now, our president has support from 90 percent of the population. The entire world likes him, and I believe that is just because he’s not a politician, he’s not a diplomat.

“It’s terrible having war in your country. On another hand it will be the end of our [struggle] with Putin. I think that for the next couple of generations, they will be like, Russian? I don’t want to even know anything about you. Just stay away.’ And that’s good. That’s what we need. That gives us a chance to build a nice society. And be successful and live like Poland or Germany or whoever. And I believe we are proving that we deserve that.

The post Dispatch from Ukraine: The Hutnyks of Lviv appeared first on Reason.com.