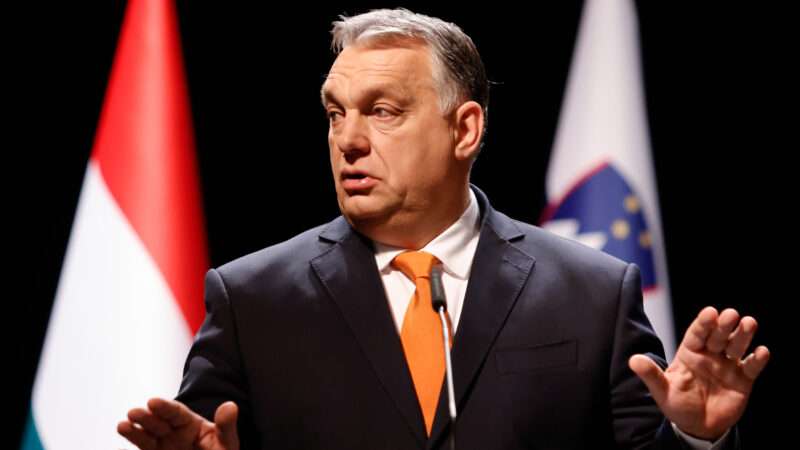 In a decree announced quietly via government gazette on Monday, Hungarian Prime Minister Viktor Orbán reversed his recent position by authorizing NATO troops to be deployed to western Hungary and weapons shipments to cross Hungarian soil, though not directly across the country’s 85-mile border into Ukraine.

The move marks the latest tap dance, not just for Hungary’s most dominant politician, but for all anti-multilateral European nationalists who have spent the past several years cozying up to Russian President Vladimir Putin. Orbán, who as recently as five weeks ago visited Moscow and described Putin’s demands on Ukraine as “normal,” has, since the invasion, expressed support for the same European Union economic sanctions he had previously predicted were “doomed to failure.”

The flip-flop is not hard to understand. Orbán faces an uncomfortably close election on April 3, and Hungarians have some of the sharpest memories on the continent when it comes to the horrors of an invading army from Moscow using overwhelming force to put down a ragtag rebellion in an allegedly sovereign country. As the Hungarian daily newspaper Pesti Hírlap put it on the cover of its February 24 edition, “Russians, Go Home!” 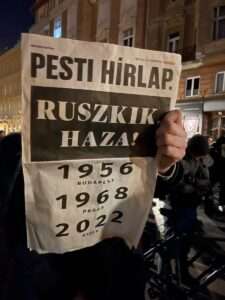 That phrase, since chanted at demonstrations in front of the Russian embassy in Budapest, has special resonance in Hungarian politics. Not only was it a rallying cry during the 1956 Revolution, but it was also re-popularized during 1989 protests by a rising young political star named Viktor Orbán. While adopting multiple personae throughout his 34-year political career, Orbán has never wavered from being venerator-in-chief of 1956. Choosing the Russian side of this latest invasion would mean political suicide.

Similar come-to-Jesus moments have recently visited such longtime Putin pals as Czech President Miloš Zeman and French nationalist Marine Le Pen. Shared complaints about the E.U., NATO, and the liberal international now share priority with a refreshed anti-Russian alliance, even among politicians who have benefited directly from Putin’s oligarchical state. “How Putin made the EU great again,” came the recent cheeky headline in Politico Europe.

The Russian incursion laid bare one of the fundamental dissonances within the industrialized world’s populist, right-wing, nationalist movements. Having long made the argument—with some cause—that multilateral institutions are elite, anti-democratic bodies corrosive to national sovereignty, the populists have never gotten around to proposing a replacement, but have instead cheered on whichever local strongman shares their critique.

Well, it turns out that nationalists untethered from mediating institutions tend not to be the nicest of neighbors. And their commitment to “sovereignty” is skin-deep.

Former Vice President and putative 2024 presidential contender Mike Pence raised some eyebrows in September when he traveled to Hungary to kiss Orbán’s ring and participate in a gruesome gathering of Euro-nationalists titled the Budapest Demographic Summit. But even there, Pence got a whiff of how American conservatives’ purported ideological brethren actually have very different attitudes about Moscow and Beijing, when his attempted applause line about “stand[ing] with the U.S. against China” was met with stony silence. Small-country nationalism is client-state corruption waiting to happen.

Putin and his oligarchical state have spent two decades cultivating politicians, buying media outlets, and signing long-term gas contracts all over Europe, preferably with partners who share his self-interested hostility toward the post-World War II multilateral institutions that were largely designed to contain Russian-dominated communism. But to the extent that Putin’s foreign allies care about their own domestic popularity in 2022, they’re dropping the Kremlin like a hot rock.

There are lessons to be learned here for the small U.S. coterie of Putin-curious pundits and would-be politicians. But will the New Nationalists take the hint?

The post Putin's Aggression Is Isolating the New Nationalists appeared first on Reason.com.