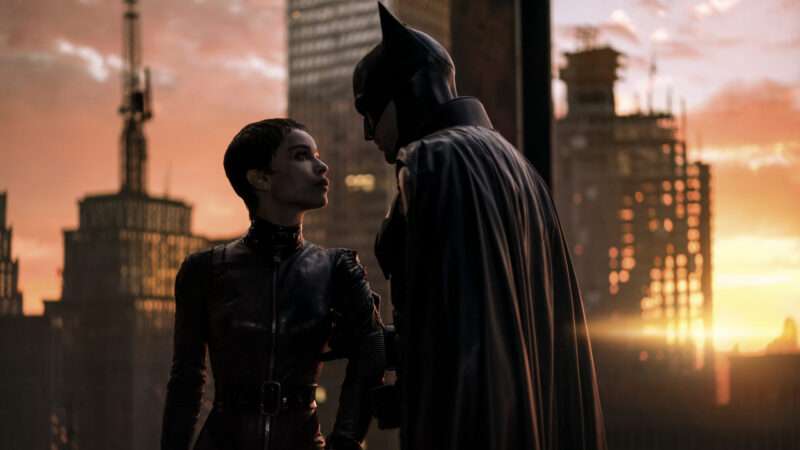 PRO: The Batman is a great action movie. Not that there’s a lot of action in it—the story’s a little too mopey for that—but there are a couple of sequences that tear things up in classic fashion. One of them, a car chase for the ages, has Batman (Robert Pattinson) roaring along in his Batmobile (not yet so-called) in furious pursuit of the cackling maniac known as the Penguin (Colin Farrell). They’re screeching down a highway through a choking pall of smoke and flame, knocking big 16-wheel trucks out of their way, when suddenly, Batman—okay, the Batman—disappears from sight in the fiery maelstrom. For a moment it looks like he’s out of the game. But then, in Penguin’s rearview, we see the Bat car soaring up out of the roaring inferno behind him and landing with a crunch back on the road. The chase continues, awesomely.

The movie’s other great action moment is set in a Gotham subway station. It’s Halloween, and a gang of mooks with neo-Joker, Day of the Dead-style face paint are menacing a blameless Asian guy. Out of the shadows, the Batman appears. To fully appreciate the havoc that ensues you must know that the movie is constricted by a PG-13 rating, so director Matt Reeves knew he had to keep the blood and the bone-break muted. Which is why a lot of the damage done in this picture is a matter of careful presentation and artful audio. We see one of the mooks rush forth to attack Batman and we sort of see Batman twist one of his arms into an unnatural position and we hear some kind of cracking sound—and that’s it. Likewise, as we watch Batman bending over a fallen mook and whaling away on him with a gloved fist, we hear what sounds like somebody stomping watermelons, but we don’t see the blows land. The Batman is a dark, intense movie that feels like it’s pushing PG-13 right up to the wall, but most of the nasty stuff is implied.

Another plus in the film is the fact that we’re not forced to sit yet again through the killing of young Bruce Wayne’s parents. We know that’s the trauma that set him on the Bat-path in the first place; we get it. And Reeves, bless him, declines to keep giving it to us. Instead, he sets us down straightaway in soggy Gotham, the crud capital of the world—a city of crepuscular murk in which cops and criminals are totally in cahoots and nice guys count themselves lucky if they can live long enough to finish last. The big bad in this rainy burg is crime lord Carmine Falcone (John Turturro). Falcone has many under-creeps, like corrupt DA Gil Colson (Peter Sarsgaard), and they can all be found every night at an unsavory club called the Iceberg Lounge, where a young woman named Selina Kyle (Zoë Kravitz), slings drinks for a living and quietly works on a secret side project she’s got cooking—a project that will soon draw the attention of the Batman.

Hovering over all of this is a serial killer called the Riddler (Paul Dano), who knows shocking things about some of Gotham’s leading citizens—including Bruce Wayne—and has decided that now is the time to tell all. Cue the municipal panic.

Pattinson is an interesting actor who’s made some very interesting professional choices since being set free from the Twilight franchise a decade ago. He’s recently taken on oddball movies like The Lighthouse and the Safdie brothers’ Good Time, and now—why not?—he’s trying to do something new with The Batman. He semi-succeeds, but this haunted character offers minimal expressive possibilities, and he’s sometimes left looking dawdly and po-faced. It’s still a soulful performance, though—especially in his scenes with Andy Serkis, who plays the Wayne family retainer Alfred Pennyworth. And as always, Batman is surrounded by more colorful characters. Colin Farrell’s fat-slob Penguin makeup is a stunt, but it’s extraordinary anyway, and the actor uses it to help build a real character. It’s also a plus that Pattinson gets to share several (although too few) scenes with Kravitz—their flirty chemistry enlivens every scene they share.

CON: The movie is three hours long and I kinda wish it weren’t.