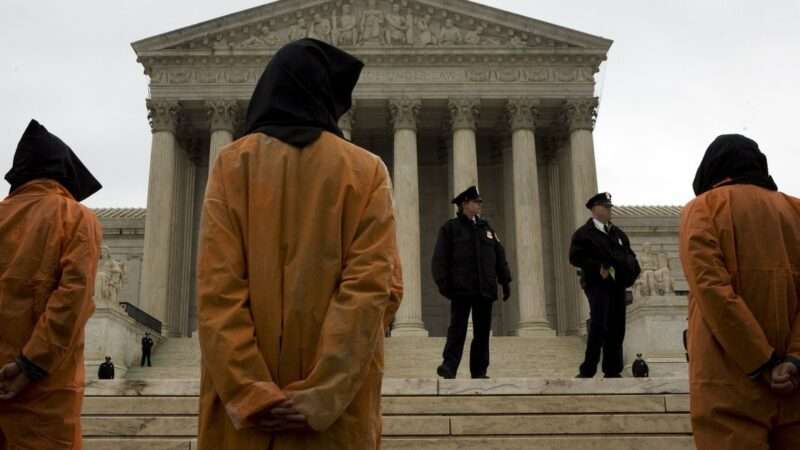 The Supreme Court ruled today that the United States can continue to withhold information about the CIA torture of prisoners at black sites during the early years of the post-9/11 war on terror from lawsuits trying to hold those involved responsible.

In a complex, technical ruling, six justices ruled in the federal government’s favor (though there were multiple separate opinions from different justices explaining their reasoning). Justice Elena Kagan agreed with part of the ruling and dissented in part. Justices Neil Gorsuch and Sonia Sotomayor were the only full dissenters.

The case, United States v. Zubaydah, revolved around Abu Zubaydah, who was captured in Pakistan in 2002 and has been held by the U.S. since then under the belief that he was a senior Al Qaeda leader potentially planning further terrorist attacks against the United States. He was tortured extensively by the CIA, waterboarded dozens of times. He’s currently a prisoner in Guantanamo Bay.

Zubaydah was reportedly held at a CIA black site in Poland as part of these interrogations. He has sued to try to hold the people who tortured him accountable. The European Court of Human Rights has already ruled that Poland violated the law when it cooperated with the CIA. The CIA and federal government, though, have refused to verify or validate that this black site actually existed. In the United States, the federal government has attempted to quash subpoenas of two former CIA contractors—James Mitchell and Bruce Jessen, the two psychologists who consulted with the agency to develop the interrogation program—as part of Zubaydah’s legal challenges. Even though there has been extensive press coverage and reports about the extent of the U.S. torture of prisoners, the CIA insists that acknowledging the existence of a black site in Poland falls under “state secrets” and that courts cannot force them to disclose the info.

The Ninth Circuit Court of Appeals had ruled against the federal government, believing (like the rest of us) that the location of the black site was now public knowledge and that confirmation of the site’s existence can no longer harm national security interests. Today the Supreme Court ruled that even though this information has entered the public domain, it can still be classified as a state secret.

Justice Stephen Breyer wrote most of the court’s opinion, accepting the government’s claim that even just confirming the existence of a black site in Poland is a threat to national security. The ruling is deferential to the authority of the executive branch to decide what falls under a national security interest and, therefore, can be kept secret. In this case, the CIA says that revealing whether we had a black site in Poland could impact intelligence-gathering efforts and “sensitive” relationships.

Justices Clarence Thomas and Samuel Alito concurred separately because Breyer’s opinion wasn’t deferential enough to the government. The two worried that calling for the court to probe any claim of national security privilege more deeply will lead to “judicial second-guessing of core national-security determinations.” Thomas concluded that Zubaydah had demonstrated only “a dubious showing of necessity” and would have dismissed his request for that reason. Justice Brett Kavanaugh, joined by Justice Amy Coney Barrett, similarly wrote that Zubaydah had only demonstrated a “dubious” need for the information. The two, however, are open to a more thorough court review if they find the claims more serious than they did in Zubaydah’s situation. Nevertheless, Kavanaugh writes, “In state secrets cases, a court’s review from start to finish must be deferential to the Executive Branch.”

Kagan wrote separately that while she agrees with the U.S. that forcing confirmation of the black site location would pose a “reasonable danger” to national security, she does not believe that should end Zubaydah’s suit. She says she’d allow him to resubmit his requests to remove all Poland-specific references to obtain the testimony he needs without revealing the locations of the black sites.

Gorsuch, joined by Sotomayor, fully dissented from the rest of the justices. Gorsuch launched a 30-page dissent with “There comes a point where we should not be ignorant as judges of what we know to be true as citizens,” quoting Watts v. Indiana, a Supreme Court case from 1949 that established that police can’t use coerced confessions that violate the 14th amendment as evidence at trials.

Gorsuch details the many, many sins of the CIA’s torture program, which failed to actually extract the information from Zubaydah that it was looking for. He notes that while the CIA may not be willing to reveal that the black site was in Poland, the European Court of Human Rights ruled as such and cited more than 100 pages of evidence. A former president of Poland has acknowledged its existence.

Gorsuch notes that the state secrets privilege is not all-encompassing. “Even a statute that constitutionally allows federal courts to pass on matters touching on foreign affairs in most cases may, in some applications, trench on powers the Constitution reserves for the Executive,” he writes, arguing that the government can’t use the privilege of state secrets to conceal violations over which the judiciary has been granted the authority to redress.

Gorsuch concludes with a barn burner of a paragraph essentially accusing the court of allowing the CIA to use the state secrets privilege simply to avoid embarrassment:

Really, it seems that the government wants this suit dismissed because it hopes to impede the Polish criminal investigation and avoid (or at least delay) further embarrassment for past misdeeds. Perhaps at one level this is easy enough to understand. The facts are hard to face. We know already that our government treated Zubaydah brutally—more than 80 waterboarding sessions, hundreds of hours of live burial, and what it calls “rectal rehydration.” Further evidence along the same lines may lie in the government’s vaults. But as embarrassing as these facts may be, there is no state secret here. This Court’s duty is to the rule of law and the search for truth. We should not let shame obscure our vision.

This is not the first time Gorsuch and Sotomayor have found themselves on the same page trying to demand more transparency from the executive branch about clandestine behavior. In November, the two of them dissented from the majority’s decision not to hear a case about whether the public has the right to see opinions released by the secret Foreign Intelligence Surveillance Court. Gorsuch’s concerns were similar in that case as well: The two of them both saw the court being far too deferential to the executive branch’s ability to keep information secret by declaring it a national security issue. In this particular case, the Supreme Court is insistent that it can do so even when the information is technically no longer a secret.