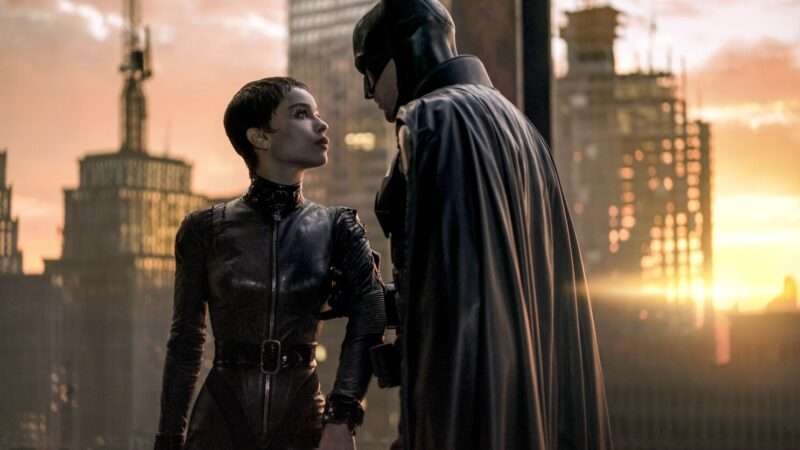 Did you ever stop to consider that Batman might be…problematic? After all, he’s a handsome billionaire white guy born into privilege who has apparently decided that the best way to improve the lot of his fellow Gothamites is to engage in some pretty cringe rich-bro cosplay that, at minimum, skirts the law and definitely makes the whole thing about him. If you think about it, shouldn’t Bruce Wayne step back and let the city’s true heroes—young reformist mayors, nightlife workers who moonlight as catburglars—take center stage? You have to admit, he could be a better ally. Again, I would just remind you: He’s a billionaire. And billionaires are, well, you know, kind of bad.

If you’ve been on superhero Twitter too much recently, you’ve probably encountered a smattering of this sort of talk, at least some of which is surely working at some level of irony such that even its authors aren’t really sure whether they mean it. But the filmmakers behind the new Batman movie, The Batman—not to be confused with A Batman—appear to have given these questions a little bit of thought too. And thus we are treated to the spectacle of a massive Hollywood tentpole production about one of the most popular fictional characters of the post-war era that at least entertains the idea that perhaps this character, the ostensible reason for the movie’s being, is kind of, maybe, a little bit bad. It’s a Batman movie that comes across as somewhat uncomfortable with the whole idea of Batman.

I include these qualifiers—a little bit of thought, somewhat uncomfortable—because The Batman isn’t an anti-Batman screed, nor is it an overt identity politics rant. The nearly three-hour movie is too sprawling, too messy, too structurally awkward and unfocused to seriously explore a single Big Theme. And director and co-writer Matt Reeves, who previously gave us Cloverfield and two truly superb Planet of the Apes installments, does at times traffic in moody Batman essentialism.

Perhaps more than any other entry in the Bat-film franchise, this is a Batman movie steeped in darkness and gloom and grimdark signifiers, more than a few of which are borrowed from David Fincher, with Fincher’s Zodiac and Seven serving as the most obvious inspirations. And for the most part, its Batman—a haunted, surprisingly gaunt, emo-revival-guy Robert Pattinson—does the things you expect Batman to do: He punches street thugs, battles costumed wackjobs, hunts for clues at surreal crime scenes, treats brooding as a lifestyle, drives a custom black car that he parks in a cavelike area, and spends his evenings flapping around angrily in a cape.

Often, this material works rather well. The gloom is well-wrought. The punching, occasionally a weak point in previous Bat-films, is fast and furious. This is not some entirely new counter-vision of the Caped Crusader, and Batfans probably won’t be disappointed.

And yet, this is a movie that sometimes comes across as uncomfortable with the whole idea the Batman mythos, the idea of a lone avenger setting out on a personal—one might even say private—quest to save his city by donning a rubber suit and punching criminals. And it sometimes seems to undercut those classically Batman-ish moments. At one point, Batman makes an escape from a building using a wing suit—a Bat-wing suit?—which lets him dive off a skyscraper, but results in him crashing and bouncing awkwardly off a bridge. The scene, which drew laughter at my screening, seems to ask: Does this gadget-costume-obsessed weirdo actually have any idea what he’s doing? Isn’t he just a rich dork with too many toys and an elaborate fantasy life?

Throughout the movie there are invocations of whiteness and privilege, networks of urban corruption, and a mayoral race between a young black woman and an older white man who we are supposed to understand represents Gotham’s dark side. The film’s finale hints at fears of climate change and the January 6 Capitol riot. Batman starts the movie by explaining in a voiceover that he wants to help the city, which is struggling, but he doesn’t quite know how. Sure, he’s out there knocking down costumed goons every night, but it turns out that doesn’t make as much impact as he hoped. The city is corrupt to the core, and money, especially the accumulation of money in the hands of a wealthy few, is at the heart of it all. So he has to learn to find other ways to be a hero.

In some ways, this isn’t new: Batman has often reflected the mood of the times, especially on the big screen. Tim Burton’s 1989 Batman was a goth freak who took the fight to muggers and clowns. Joel Schumacher’s late ’90s Batman was a camp throwback who emerged from the carefree silliness of the late Clinton era. Christopher Nolan’s Batman riffed on the surveillance debates of George W. Bush’s second term in The Dark Knight and used the excesses of the Occupy Wall Street movement as fodder for the villainy of Bane in The Dark Knight Rises.

All three directors sometimes questioned aspects of the Batman persona: Wouldn’t he have been a freak? Isn’t this whole scenario ridiculous? How would a billionaire playboy actually have set himself up as a masked vigilante crime fighter? But in the end they fully affirmed the character, the essential vitality and goodness of Batman, and the righteousness of his cause.

In contrast, in The Batman, the villain, The Riddler, sees himself as Batman’s flip side, participating in the same quest to root out villainy from the city—to the point where he even suggests a connection between Bruce Wayne’s fortune and the city’s corrupt, power-seeking elite. This sense of connection between Batman and his rogue’s gallery isn’t entirely new, and The Batman doesn’t buy the Riddler’s theory. But the movie doesn’t quite absolve its hero either, and it resolves in what amounts to a promise that, going forward, Batman will try to do the work. He’ll try to do better. But, you know…he’s a self-absorbed white guy billionaire, after all, so how good could he be?