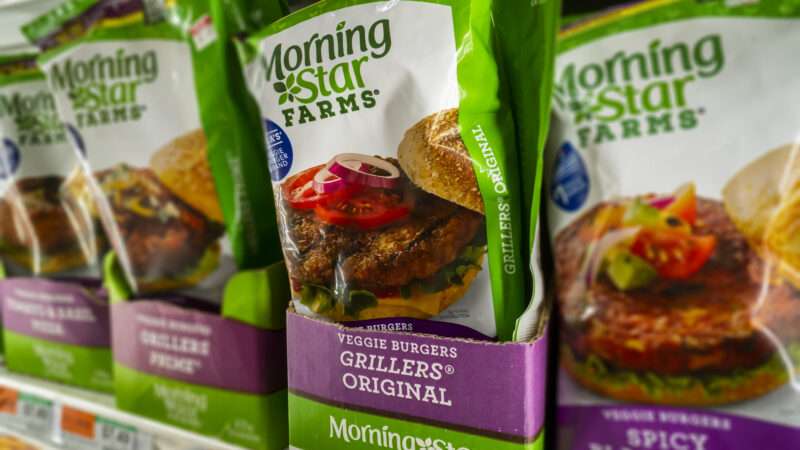 Recent reports suggest there’s a growing realization among consumers, industry, investors, and others that overheated predictions of a meatless future—one in which steaks, bacon, chicken nuggets, and other foods made from dead animals will be supplanted by plant-based imitations of meat dishes and lab-grown meats made from animal cells (the latter of which is still exceedingly rare)—may have been based on wishful thinking.

As Food Dive reported this week, sales of imitation meat products are faltering. The website cites remarks and earning reports from Beyond Meat—a leader in the plant-based sector that counts among its fans none other than me—that combine a bleak present reality of “negative growth and high net losses” with fears over whether this market downturn could be permanent.

Currently trading at around $46 per share, Beyond Meat’s stock price is a heck of a lot closer to its 52-week low (around $41) than it is to its peak during the same period (more than $160).

The Food Dive report also notes that other makers of fake meat, including Maple Leaf Foods, admit the sector’s growth has “stalled.”

In addition to floundering sales, other data points include, for example, that Dunkin’ halted sales of the Beyond Sausage vegetarian breakfast sandwich at most locations after sales didn’t meet expectations.

These data suggest not as many people are as interested in meatless foods as supporters of plant-based and cell-grown meats have predicted. But hype about the looming dominance of meat alternatives has always exceeded reality.

“Going forward, the meat value chain could be simplified dramatically, as ‘clean meat’ labs could take the place of farms, feedlots, and slaughterhouses,” the market-research group CB Insights reported in an August research brief, part of a look at what the group called suggested could be a “meatless future” in this country.

Maybe so. But in 2019, for example, The New York Times reported that plant-based meats make up only around 1 percent of the overall meat market. And, “almost a decade after the first cell-grown hamburger was introduced at a packed media event, the notion of buying an engineered steak at the grocery store remains an expensive theory,” the Irish Times reported this week.

At a time of record-high meat prices, one would expect meat alternatives to be growing in popularity. But sales of meat made from formerly living animals are strong. “Total 2021 meat sales were virtually flat compared to the record 2020 sales, but compared to the pre-pandemic normal of 2019, sales averaged between 17% and 20% above typical levels,” Drovers reported in January.

The policy implications of what appears to be declining consumer interest in meat alternatives could be legion. For example, last year Meatless Mondays, a vegetarian-inspired campaign to get cities, foodservice providers, and others to serve vegetarian dishes instead of meat dishes on Mondays throughout the year, extolled New York City’s “commitment to meat reduction” as part of the city’s absurd 10-Year Food Policy Plan.

“After a successful Meatless Monday pilot initiative launched in 2018, all 1800 of the New York City’s public schools now serve vegetarian meals on Mondays,” the group noted. “Several other city agencies have adopted Meatless Monday, including NYC Health + Hospitals, the largest public healthcare system in the country, as well as the Department of Homeless Services and the Department of Correction.”

Meanwhile, the USDA and FDA are jointly trying to figure out how to regulate cell-based meats. Given America’s love of meat and the sway of America’s meat industry over regulators and regulations, I’m not confident any final rules will do anything to bolster sales.

In truth, though, promoting either meat or its alternatives should never be a policy goal.

Many plant-based food producers rightly chafe at federal policies that promote eating meat. “Vegan food companies are fed up with an onslaught of pro-meat, pro-dairy laws,” The New York Times reported in 2019.

I join them in their consternation. But many supporters of meat alternatives appear merely to want the government to stop promoting a dietary agenda they abhor in favor of one they prefer. Some anti-meat groups, for example, are trying to strengthen sales of meat alternatives by proposing sweeping and costly policy changes. The U.K.-based Vegan Society, which opposes eating meat, has laid out a set of six policy approaches it says will help shift consumers away from meat and towards plant-based foods. The policies include government subsidies; promoting the growing of plants among new farmers; more research funding; taxing farm animals; and buying more vegetables to be served in public dining facilities.

I don’t have a rooting interest here. As I’ve written time and again, I don’t care at all whether people eat meat, plants, or some combination of these foods. To each their own. But when businesses and activists attempt to push government policies that would restrict or promote certain food choices—whether that’s more or less meat, meat alternatives, vegetables, or other foods—then those policies are wrongheaded and must be challenged.

The post The Fake-Meat Revolution Has Stalled appeared first on Reason.com.