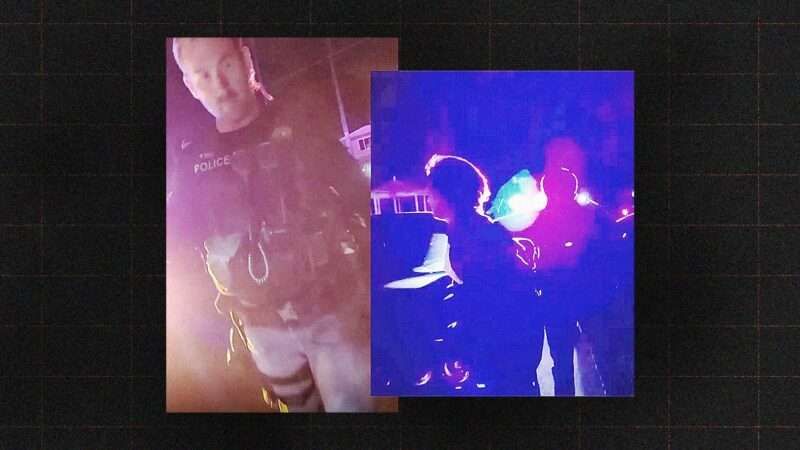 Cell phone videos from both women appear to show yet another instance of police retaliating and arresting people for filming them. Federal appeals courts have repeatedly upheld the First Amendment right to film the police, so long as one doesn’t interfere with their duties, but cases of illegal arrests still pop up around the country.

According to Herefored’s lawsuit, Hemet police initiated a traffic stop as Gadison was pulling into his driveway on the night of March 31, 2021.

“With no reasonable suspicion or probable cause, the Hemet Officers asked Plaintiff for permission to search his vehicle,” the lawsuit says. “When Plaintiff Gadison refused, Officers forcibly removed him from his vehicle and began to aggressively handcuff and detain him.”

Several cell phone videos captured what happened next. Monett Herefored, Mariah’s 54-year-old mother, began filming Gadison’s arrest. A Hemet officer warned her to back up and threatened to arrest her for obstruction.

“I am stepping back,” Herefored said. “I have moved.”

As another officer escorted Gadison away in handcuffs, the first officer approached Monett Herefored again, closed the driver-side door of the police cruiser separating them, and ordered her to step back twice. The video then shakes and stops. The lawsuit alleges the officer smacked the cell phone out of her hand.

Mariah Herefored then began filming the handcuffing and pat-down of her mother, who protested that she hadn’t done anything. After she was led away, the officer walked up to Mariah Herefored. The officer did not warn her to back up or issue any other command. After he approaches, the video goes black, followed by several minutes of Hereford screaming in pain on the ground. At one point the officer is heard yelling, “Shut the fuck up!” Her children can also be heard crying hysterically in the background.

“It is heartbreaking to know that my children had to witness first-hand, this heightened level of evil, hate and prejudice from the police at such a young age,” Gadison said in a press release from the law firm of attorney Toni Jaramilla.

According to the lawsuit, the officer slammed Mariah Herefored’s head into the ground, and she was taken to the hospital that night and treated for a “closed head injury; left shoulder pain; low back pain; neck pain; [and] whiplash.”

The lawsuit also claims officers beat the family’s dogs, “despite the dogs being restrained by chains that prevented them from having the ability to reach the Officers.”

Cell phone video from Herefored’s neighbors, included in the footage released by Herefored’s lawyers, does not show police beating the dogs, but it does show them picking one up by the collar. The dog appears limp. “I think they killed the dog,” one of the neighbors says.

The lawsuit says Gadison and Mariah Herefored were taken to jail, while Monett Herefored was issued a citation. The Riverside Press-Enterprise newspaper reports that no charges have been filed against them, according to county court records. One of their dogs required veterinary care, according to the suit.

ProPublica reported last year on the case of Louisiana resident Jacobi Cage. Cage was filming Jefferson Parish sheriff’s deputies when one smacked his cell phone out of his hand and flipped him off. Cage returned the gesture, which is also protected by the First Amendment. The deputies immediately grabbed him, slammed his head into the ground, and charged him with battery of an officer and resisting arrest.

man just recording got assualted and arrested for nothing pic.twitter.com/Ef3z2WVfAI

In 2019 in Vallejo, California, a police officer violently detained a Marine veteran, Adrian Burrell, for filming a traffic stop from his porch.

While civil liberties groups say filming the police is both protected and crucial for government accountability, some lawmakers around the country have been trying to make it harder for citizens to do so. The South Carolina, Arizona, and Florida legislatures have all introduced bills over the past two years to restrict the public’s ability to film the police.

Herefored and her family’s lawsuit seeks damages for violations of their First, Fourth, and Fourteenth Amendment rights, as well as battery, false arrest, and intentional infliction of emotional distress.

“The fight against injustice and violence against women is also about law enforcement needlessly violating women for sport,” Jaramilla, Herefored’s attorney, said in a press release. “Nothing about Mariah and Monett Herefored was a threat to these officers or justified the brutality these officers inflicted on a mother and grandmother.”

The Hemet Police Department declined to comment on the lawsuit.