Amazon’s Clubhouse competitor has arrived. The retail giant on Tuesday launched a new mobile app called Amp, which allows people to create live “radio shows” where they can act as a DJ, by taking callers and playing tracks from Amazon Music’s tens of millions of licensed songs, ranging from classic titles to today’s music. The app is not yet available to the wider public, as it requires an access code to use.

“It’s easy to share your voice and favorite songs with the world on Amp,” reads the app’s description on the App Store. “Decide on a show title, create a playlist, and you’re just seconds away from streaming your own radio show,” the page says. 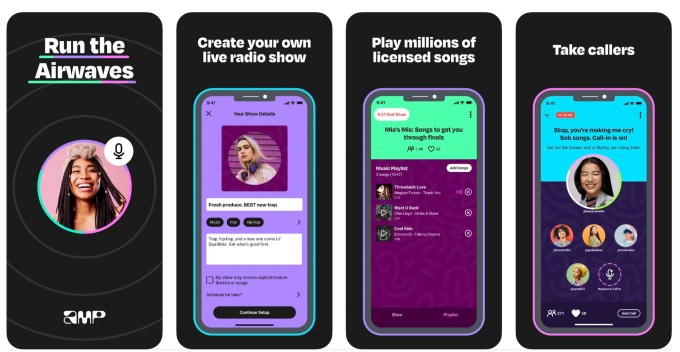 The new app, which was previously reported by The Verge when in development under the name Project Mic, represents Amazon’s somewhat belated entry into the live audio market. While the app Clubhouse led the way by establishing a new format for live audio social interactions, the idea has since been spun out into numerous competitors — each with their own angle, including Twitter’s Spaces, Facebook’s Live Audio Rooms, Spotify’s Greenroom, and those from smaller startups, like the Mark Cuban-backed Fireside or David Sacks-backed Callin.

However, for the most part, these Clubhouse rivals have focused on talk — like live podcasts. Amazon’s Amp differentiates itself by providing access out of the gate to the broader Amazon Music catalog. That means Amp users can play DJ, streaming and chatting about their favorite songs and artists to establish themselves as a creator. Or they can use the app to talk about anything else — like sports or pop culture, for example — but do so while also curating a selection of music for their listeners and talking live callers.

According to Amp’s App Store description, creators will also be able to pre-plan and schedule their shows, alert listeners to their upcoming shows, control who speaks when taking live callers, and more. Notably, creators do not have to pay the labels when accessing the music for their show, the app’s listing notes — that’s being covered, it seems.

Users will sign in using their Amazon credentials or can create a new Amazon account to use Amp, the app’s sign-in page says.

Prior reports indicated Amazon will use the platform to bring in celebrities and influencers to host shows, which you’ll be able to search for by name, topic, or music, but the company isn’t yet touting any big names attached via its App Store listing.

The Amp website is also currently password-protected and the app itself requires an access code to get in — indications that the app isn’t quite ready for prime time, but is rather launching for limited testing ahead of a wider public debut.